On the road to new cinema in Malaysia 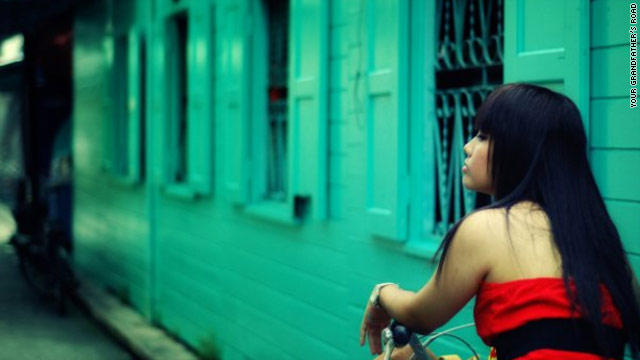 (CNN) -- Can the internet get to the heart of the Malaysian film industry?

A group of independent Malaysian filmmakers hope so and have been enlisting help online to produce a new film called "Your Grandfather's Road".

The film's title comes from a Malaysian expression, usually said to berate road hogs, and as Malaysia's first 'crowd-sourced' film its producers have been on a journey of discover just trying to make it.

Asking for everything from story ideas to cast and soundtracks, the producers' aim is to create a road movie that reflects the lives of young Malaysians.

"I felt there was a disconnect [in films] from the experience of the people," said Manesh Nesaratnam, one of the film's producers.

"The more people I met in Kuala Lumpur and the more time I spent there I realized it was really worth listening to the young people, to how they feel, what's happening in the nation, with other citizens and migrant workers.

We looked at crowd-sourcing as an experiment and we didn't know what to expect.
--Manesh Nesaratnam, filmmaker
RELATED TOPICS

"We looked at [crowd-sourcing] as an experiment and we didn't know what to expect. We are happy on one level because we got a diverse set of responses."

During the summer Nesaratnam and his team poured over contributions for script ideas, locations and asked for those keen to appear in the film to send in online auditions.

But rather than a provide a glowing endorsement for the power of the internet and social networks, the experience has revealed something more universal about asking people to bear their souls online.

"For a film you really need people to share their deepest darkest stories. So we felt people held back. While we got lots of stories we felt they weren't really as deep as they could be.

"I think it comes down to being on the internet and people being more cautious about being seen."

One girl's candid account of her drunken, abusive father was taken down from the site after she complained her family was unhappy that she had posted it on the site.

"She didn't self censor, but I think a lot of people did. We tried to get around this at the start by pushing our writers to reveal more and be vulnerable to the audience and hoping they would reciprocate, but it wasn't to the degree that we would have liked."

If people weren't so ready to broadcast their innermost thoughts, Nesaratnam found they were prepared to debate ethnic and religious identity, something that remains a central part of life in the culturally diverse country.

"A lot of people had things to say about that. There was a small debate going on about whether it was better to stay [in Malaysia] and see through these tough times or up and leave for greener pastures."

As well as the personal stories the themes of identity discussed online look set to have a central place in the film as Nesaratnam and the producers seek to secure more funding through traditional sources.

"We've kept true to the spirit of what we've received through the website," he said.

"I don't think there's a problem with Malaysian expressing themselves online, but getting those ideas into the mainstream is harder."

"There's a vibrant independent scene, but the mainstream isn't as rich and as diverse as it could be."

While Nesaratnam hopes his final film will not feel the cut of the censors, he's aware of its conservative attitude. One scene with the RELA volunteer police force, who Nesaratnam says don't have a good reputation, could fall foul of their editing.

"A new Malaysia is being born and what does it look like? It looks like the opinions found on the website and in the characters in the film. I hope we'll present a new view of Malaysia that hasn't been seen on the big screen here."