Taliban claims responsibility in blasts at shrine in Pakistan 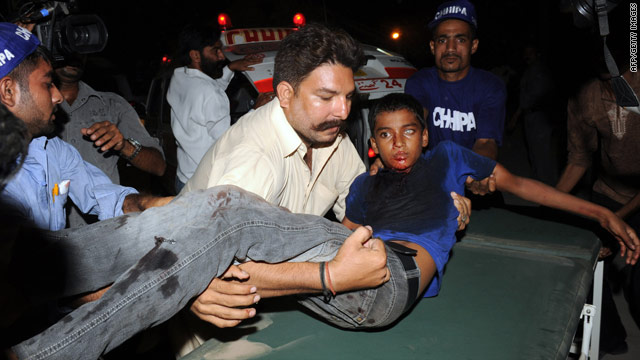 (CNN) -- The Pakistani Taliban has claimed responsibiilty for two explosions Thursday at a shrine in Karachi in which at least eight people were killed and dozens injured.

Saghir Ahmed, Sindh's health minister, told CNN that the victims have been brought to hospitals in Karachi and 60 people are being treated for injuries. Authorities said crews were sifting through human remains at the site.

"The relentless attacks on ordinary Pakistani citizens by those who want to impose an extremist mindset and lifestyle upon our country will not deter our government and the Pakistan Peoples Party," a statement from Zardari's office said.

"We remain committed to fighting these murderers and expelling them from our land."

The attack occurred Thursday night, the busiest time at the shrine because it's the eve of Muslim Friday prayers. Karachi and Sindh residents make pilgrimages to the shrine to offer prayers.

Thursday night also is when people distribute free food to the poor, an act that is one of the five pillars of Islam.