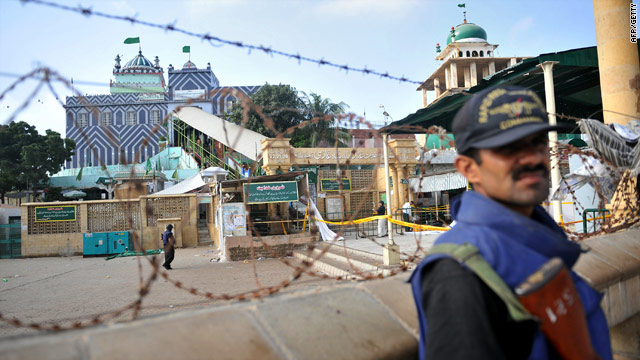 Islamabad, Pakistan (CNN) -- The death toll from two blasts at a shrine in Karachi has risen to 9, officials said Friday.

In addition, the number of those wounded in the Thursday explosions has climbed to 74, said Dr. Saghir Ahmed, the health minister for Sindh province.

The suicide attack was launched at the shrine of a revered Sufi Muslim saint, Abdullah Shah Ghazi, said Zulfiqar Ali Mirza, interior minister of Sindh. Mirza has ordered the closing of Karachi shrines until further notice.

The Pakistani Taliban has claimed responsibiilty for the explosions.

The attack occurred Thursday night, the busiest time at the shrine because it's the eve of Muslim Friday prayers. Karachi and Sindh residents make pilgrimages to the shrine to offer prayers.

Thursday night also is when people distribute free food to the poor, an act that is one of the five pillars of Islam.