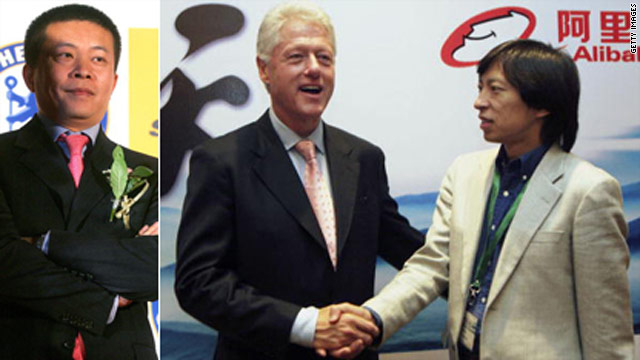 Beijing, China (CNN) -- One constant challenge China faces as its economy continues to explode is finding talent -- people with the managerial, technical and creative savvy who can adapt to the country's distinct culture and working environment.

They find them at home, but they are not sufficient to meet the growing demand. They also find them among Chinese returning from overseas.

China currently sends more students abroad than any country in the world. Between 1972 and 2009, about 1.39 million Chinese went for further studies, according to official data.

In recent years, more than 400,000 of them returned home, lured by prospects of lucrative jobs and a familiar culture, says David Zweig, a professor of political science at Hong Kong University of Science and Technology who is writing a book on this phenomenon. They are known colloquially as "haigui," or "sea turtles," because it sounds the same as the phrase "returned from overseas."

In the past, returning overseas Chinese students were a rarity and were much sought after.

After the establishment of the People's Republic in 1949, Chinese experts abroad were lured back home to contribute to post-war reconstruction.

Most prominent among them was the late Qian Xuesen, a U.S.-educated physicist who is credited as the pioneer of China's space program.

If they wish to work in big cities, they have to compete with top graduates from the best Chinese universities for high paying jobs
--Headhunter Guo Yushi
RELATED TOPICS

When Deng Xiaoping initiated his reform and open-door strategy three decades ago, he pushed an overseas-study program. The late leader, who studied briefly in France, believed that scholars and students sent abroad would bring back advanced ideas and expertise needed to modernize China.

I knew quite of few of them -- brilliant, idealistic college graduates -- who left for an overseas stint in the 1980s and 1990s.

Some studied law, business and finance. Others studied science and engineering. Some came back on schedule. Others overstayed, finding lucrative jobs.

For years, critics of the program feared it was creating a "brain drain," but now the trend has reversed.

Tens of thousands of them have found their niche in China.

"They were drawn by the domestic marketplace," said Zweig. "They have skills and technologies that are not available so they fill-in some shortage in China."

Some are making their mark in government service, like Yi Gang, a U.S.-educated technocrat who is now a vice president of China's central bank.

Another notable "sea turtle" is Rao Yi, who quit his chair professorship at Northwestern University in the U.S. to become dean of Life Science at Peking University.

"About half of China's IPOs in the last 10 years on Nasdaq have been companies owned or established by returnees," Zweig said.

"The haigui we've placed as senior executives are doing well," said Guo Yushi, a headhunter at Korn and Ferry. "They are moving up into the first tier, getting senior job titles and good compensation. They know the local culture and have multi-skill credentials."

Some are not doing so well. As they came home in droves, their appeal has diminished.

Bonny Li spent two years -- and substantial money -- earning a master's degree in global marketing in the UK. Soon after he returned to Beijing in 2007, he found a job at a joint venture company paying $1,600 a month. "It's not my ideal job, but it's okay," he said.

After their time abroad, "sea turtles" are shocked at the high cost of living, expensive housing and the rapid pace of urban life. Those who expected salaries comparable to those offered abroad end up disappointed.

Headhunter Guo Yushi said: "If they wish to work in big cities, they have to compete with top graduates from the best Chinese universities for high paying jobs. They have to lower expectations and accept lower pay and lower titles."

There are other push-backs, too. Some employers are reluctant to hire "sea turtles" because they are reputed to be arrogant, demanding and unwilling to abide by local management practices.

"Employers expect us to do more and talk less," Bonny Li said. "You just have to keep a low-profile and adapt to their corporate culture."

Even their degrees are being questioned by detractors in the local media and cyberspace. A few "sea turtles" were said to have gone to obscure schools overseas, belittled by critics as yeji daxue (wild chicken universities), or diploma mills.

Youth Times, a provincial newspaper, wrote: "How many of such diplomas are fake? How many 'sea turtles' who supposedly fed on 'foreign ink' (yang moshui) actually went to wild chicken universities?"

Some were called losers who relied on their parents' money to study abroad because they failed to pass the tough annual national entrance examinations in China.

Unimpressed locals charged that the students returned only because they could not find good jobs abroad due to the global recession.

All the same, China remains keen to find talent overseas. The central government is pursuing a plan called "1000 Talent's Program," offering top salaries, housing and other perks to encourage more "sea turtles" to join state-owned enterprises and the government.

"These people are expected to be the very best mainland Chinese living abroad," said Zweig.

If China is to evolve from a mere manufacturing capital of the world into a global hub of innovation, it will have to realize that developing human capital is more important in the long run than technology and money. Talented people will bring both.