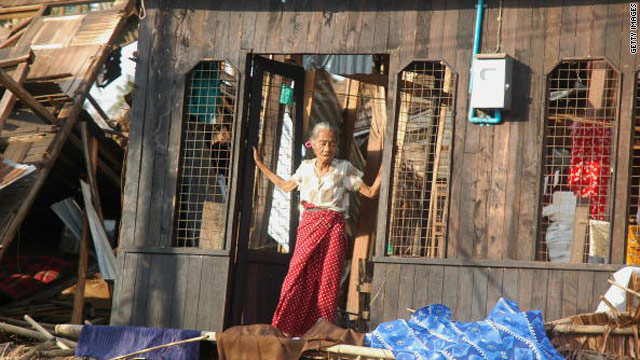 An elderly woman comes out of her destroyed house in the worst cyclone-hit Dedaye township, some 48 kilometers south of Yangon, on May 9, 2008.
STORY HIGHLIGHTS

(CNN) -- The people of Myanmar are battered by nature and weighed down by dictatorship, but they are also resilient, hard-working, good-natured and filled with human kindness.

Now the people are getting to vote but few -- even among those who can see an optimistic silver lining -- believe it will be free and fair.

When Cyclone Nargis smashed through the country in 2008, it also opened the door a little on one of the world's most closed nations.

Amid the destruction of Nargis, CNN was able to see firsthand the spirit of Myanmar's people.

Emaciated corpses rotted in the branches of trees. From a distance, they looked like bed sheets drying. Entire riverside villages were gone. The bones of the dead were strewn along the muddy banks.

Scattered among the destruction were survivors with an indomitable spirit. They fashioned makeshift homes out of splintered trees. Some were fishing again, with others working the fields contaminated by dirty water in a vain effort to retrieve a lost harvest.

In the larger towns, only months after the disaster, traders were selling again, the devout Buddhists filling the bowls of monks and novices with what little they could spare.

For almost a month, I traveled with a World Bank relief and recovery team meeting locals and government officials. There were agricultural experts, medics and engineers, not bureaucrats toeing the military line.

They were people with genuine skills and an equally genuine desire to help their people.

The cyclone, along with the destruction, had lifted the lid on secrecy -- allowing the world to see the Myanmar people.

The ruling generals had been accused of ignoring their people and, in the end, had to overcome their suspicion of the outside world and allow in shipments of foreign aid.

In the two years since, the curtain has been pulled back just that little bit more. After the hard line of the Bush administration, U.S. President Barack Obama has shown a willingness for dialogue; twice sending an envoy to Myanmar.

Civil society groups have built on their relief work after Nargis to maintain a political presence.

Some of those groups are now training and educating candidates and parties to make the most of the November 7 election.

The International Crisis Group has released a study saying the election will define the political landscape for years to come, adding the world "should not dismiss the attempts to introduce more civilian character" after decades of military control.

Yet some critics have labeled the poll little more than a farce.

Under the new constitution, one-quarter of the parliament will be reserved for the military. Senior government ministers have resigned their military posts to form the junta-backed United Solidarity and Development Party -- so they would get seats reserved for civilian groups despite their military connections.

While the International Crisis Group tries to see some positives, it also concludes the constitution and the election will "enrich the military's power."

Aung San Suu Kyi, the very symbol of Myanmar's democracy movement, remains barred from the process. Her National League for Democracy is outlawed.

Of course, this is nothing new. The NLD won the last ballot in 1990 but was never allowed to take office and Suu Kyi, later a Nobel peace laureate, has spent the years since mostly under house arrest.

There are believed to be more than 2,000 political prisoners in Myanmar, according to Amnesty International. The United Nations says this raises big questions about the entire process.

U.N. Secretary-General Ban Ki-moon says Myanmar needs to show the world it is credible by releasing Suu Kyi and other political prisoners. Suu Kyi wants no part of this election. "Since the NLD is not participating in this coming election, she doesn't want to vote," said Nyan Win, the NLD's lawyer.

She is due to be released from house arrest on November 13, just days after the election, though whether that will happen is far from certain.

While the NLD is playing no part, other parties are. There are 40 different parties registered, including an NLD breakaway group: the National Democratic Force.

Despite the criticism, some analysts prefer to see participation itself as a breakthrough.

"Of course the election won't be free and fair, but there's a chance that over time more political space will be created," said Professor David Steinberg, director of Asian Studies at Georgetown University.

The generals, however, have shown before that they are prepared to change the rules to suit their ambitions.

They have brutally cracked down on pro-democracy reform movements, most recently during the so called 'Saffron Revolution' led by Buddhist monks in 2007.

But they are fearful of the threat from heavily-armed ethnic militia groups throughout the country. They have withdrawn from the old capital Yangon to a jungle base at Naypyidaw.

Ties to that other hermit kingdom, North Korea, and talk of developing nuclear weapons, have the United States and regional powers concerned.

History shows democracy can be a force as lethal as that unleashed by mother nature. When Cyclone Nargis flattened the country, maybe the generals glimpsed the ultimate fragility of their own hold on power.