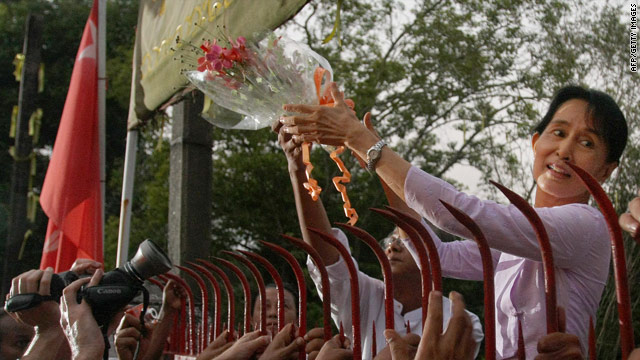 (CNN) -- As news of the much-awaited release of Myanmar Nobel laureate Aung San Suu Kyi reverberated throughout the world, activists and world leaders were seizing the opportunity to make a case for democracy and human rights in this besieged nation.

Myanmar -- formerly known as Burma -- has been ruled by a Marxist military junta since 1962. The military regime has cracked down on political dissidents, forcing thousands to flee.

In a statement released Saturday, President Barack Obama called Suu Kyi a personal "hero" and called for the military regime to "release all political prisoners, not just one."

"The United States looks forward to the day when all of Burma's people are free from fear and persecution," Obama said in Saturday's statement.

"Following Aung San Suu Kyi's powerful example, we recommit ourselves to remaining steadfast advocates of freedom and human rights for the Burmese people and accountability for those who continue to oppress them," he said.

"I urge the authorities of Myanmar to now release the other 2,200 political prisoners as a clear sign that the new government intends to respect human rights and forge a new future for the country," she said.

British Prime Minister David Cameron also said Suu Kyi was an "inspiration" and that the military regime must uphold its decision.

"Her detention was a travesty, designed only to silence the voice of the Burmese people," he said.

European Commission President Jose Manuel Barroso called for the "unconditional release" of all detained dissidents and said Suu Kyi's freedom should be unrestricted.

"This is the only way to ensure that the Myanmar elections of 7 November are the start of a real transition to democracy," Barroso said Saturday.

We recommit ourselves to remaining steadfast advocates of freedom and human rights for the Burmese people and accountability for those who continue to oppress them.
--President Obama
RELATED TOPICS

"People who love freedom everywhere admire her and the long sacrifice she has made for her people," he said.

"In light of recent elections, I also hope that Aung San Suu Kyi's release will lead to the rapid inclusion of her and the Burmese citizens in governance," he said.

"We strongly support the aspirations of the Burmese people and their demands for basic human rights: freedom of speech, worship, and assembly," said Bush.

In Asia, Australia's Prime Minister Julia Gillard called Suu Kyi's detention "completely unjustified" and said her government is lobbying for an opportunity to meet with her personally.

"Minister for Foreign Affairs Kevin Rudd said the government was seeking an early opportunity to speak with Aung San Suu Kyi, to convey Australia's support for her and her struggle for democracy in Burma," Gillard said.

"We will closely monitor her situation, including any restrictions imposed on her freedom of movement or association.

Australia continues to call on the Burmese authorities to immediately and unconditionally release the more than 2000 political prisoners still detained in Burma," she said.

China's official Xinhua news agency was less exuberant with words on Saturday. China has refrained from publicly pressuring Myanmar and has remained the Marxist regime's closest ally since the military coup 20 years ago.

India has also been criticized by the United States and others for not voicing opposition to the military junta.

When India accorded a red-carpet welcome in July to the top leader of Myanmar's military junta, there was little mention of human rights abuses allegedly taking place in Myanmar's prisons, critics claimed.

Human rights advocates and Suu Kyi followers overseas still expressed concerns not only for repercussions of her release, but the situation of the prisoners still incarcerated.

Burma Campaign UK warned that her release should not be seen as the final return of democracy in Burma and also called for the release of prisoners.

"I am thrilled to see our democracy leader free at last, but the release is not part of any political process, instead it is designed to get positive publicity for the dictatorship after the blatant rigging of elections on 7th November. We must not forget the thousands of other political prisoners still suffering in Burma's jails."

In Saturday's statement, Phan and the Burma Campaign UK recalled previous incidents in which her release was widely broadcast but did not come through.

"It is the third time Aung San Suu Kyi has been released from house arrest," the statement said.

"The last time she was released, in 2002, it was part of a U.N.-led initiative to try to persuade Burma's dictatorship to enter into dialogue leading to a transition to democracy. However, when the time came for substantive discussions the dictatorship refused to continue the dialogue. "