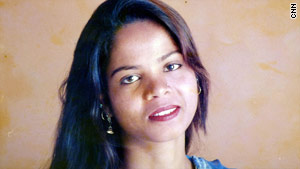 "What basically he's made it clear is that she's not going to be a victim of this law," Gov. Salman Taseer told CNN International's "Connect the World" program.

"I mean, he's a liberal, modern-minded president and he's not going to see a poor woman like this targeted and executed. ... It's just not going to happen," Taseer said.

Asia Bibi, who has been jailed for nearly 15 months, was convicted in a Pakistani court earlier this month of breaking the country's controversial blasphemy law by insulting Islam's Prophet Mohammed, a crime punishable with death or life imprisonment, according to Pakistan's penal code. She was sentenced to death.

She has filed a petition for mercy with the High Court, Taseer said.

"If the High Court suspends the sentence and gives her bail then that is fine. We'll see that, and if that doesn't happen, then the president will pardon her," he said.

CNN's Luke Henderson and Ravi Agrawal contributed to this report.