Korea crisis: How will China respond? 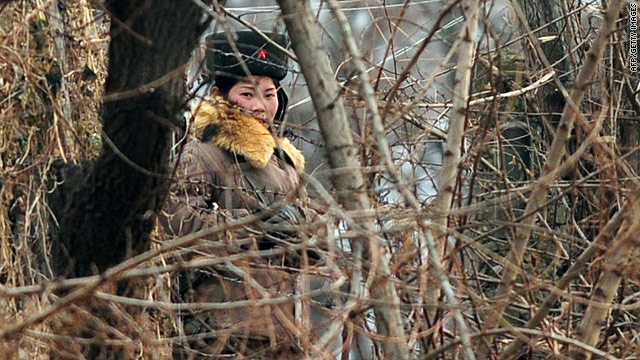 An armed North Korean soldier on border patrol near the Yalu River in the North Korean town of Siniuju on November 24, 2010.
STORY HIGHLIGHTS

Beijing, China (CNN) -- All eyes are on China after North Korea provoked threats of "enormous retaliation" from South Korea by firing artillery rounds at Yeonpyeong Island.

Four people were killed in Tuesday's shelling. The North claimed South Korea provoked the attack by holding a military drill off their shared coast in the Yellow Sea.

China is North Korea's ally and its biggest trading partner. They share a long border prompting speculation about how the communist country could react to tension next door.

China has the power to cut off North Korea's most important link with the outside world by stopping their shipments of food, fuel and weapons, but has indicated no intention to do so.

However, analysts say China's leverage over its next door neighbor may be over-rated.

South Koreans caught in the crossfire

Attack on island in the Yellow Sea
RELATED TOPICS

"China does have more influence than other players but we have to remember China does not have absolute influence," said Wenran Jiang, political science professor at University of Alberta.

China is also reluctant to lean heavily on allies like North Korea because it follows the principle of non-interference in other countries' internal affairs, analysts say.

Beijing is trying to bring North Korea back to the negotiating table.

North Korea walked away from the last round of the six-party talks aimed at getting North Korea to give up its nuclear weapons program in exchange for economic aid and political concessions.

The talks have been stalled for about three years. Analysts say the heightened tension in the Korean peninsula is a reminder that hotspots like the Korean crisis need urgent action. They say reconvening the six-party talks is one of the most immediate steps available to re-engage with the nation.

So what does North Korea want? "What they really wanted for years is diplomatic recognition of North Korea by the U.S.," said Wenran Jiang.

"They are frustrated because they feel they have done the six-party talks, they have launched missiles, have done nuclear weapons tests, they have made all kinds of threats but they still don't get the U.S. to move towards normalization," he said.

Analysts say, despite the apparent ineffectiveness of the six-party talks, Beijing still stands a better chance of bringing Pyongyang back to the fold through diplomacy.

"It's important for us to remember that during the six-party talks these conflicts were less likely to happen, while without such mechanism we see such bloodshed." Jiang said.

Observers say it all comes down to building trust -- a difficult task -- and here China can play a unique role as a rising global power and a potential peace-maker.