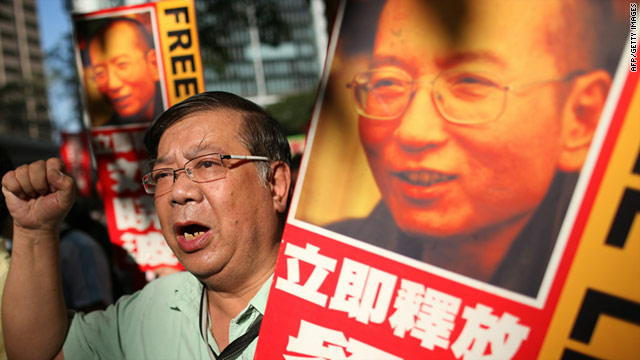 Protesters in Hong Kong on December 5 demanding the release of Liu Xiaobo from a Chinese jail.
STORY HIGHLIGHTS

Beijing (CNN) -- He is a lean, bespectacled figure: he is the very image of the literature professor that he is -- but the mild demeanor is deceiving.

Liu Xiaobo is the quiet man who sacrificed his freedom, who challenged the very foundations of the Communist Party and who dared to raise the issues of human rights and democracy.

To the Chinese government, this makes Liu Xiaobo nothing less than an enemy of the state.

Liu is serving 11 years in prison for what China calls "inciting subversion of state power."

In 2008, he was one of the key authors of "Charter 08": a manifesto calling for social and political change. It branded as "disastrous" the Chinese government's approach to modernity. It said the government had "stripped away the rights of people" and "destroyed their dignity."

China cracking down on dissidents

"Where is China headed in the 21st century?" it asked. That question sealed Liu's fate.

The man who had been arrested and jailed three times in the past was detained again. Other dissidents too, were rounded up. But in prison they felt empowered.

Liu's wife, Liu Xia, said the arrest signaled that the government was under pressure.

"It shows they are very fragile. They are afraid of a pen, a voice, a different opinion. I think they are more afraid than us," Liu Xia told CNN.

Liu Xiaobo was born on December 28, 1955, to an intellectual family in Changchun, China.

Liu was branded a counter-revolutionary after he supported the Tiananmen demonstrations in 1989. He was in and out of prison, placed under house arrest, and then in 2008 won thousands of supporters after Charter 08 was published online.

Being awarded the 2010 Nobel Prize for Peace has now won him a global audience.

He is compared with other laureates imprisoned for their beliefs, like Myanmar's Aung San Suu Kyi and South Africa's Nelson Mandela. But to some observers, like Nicholas Bequelin from Human Rights Watch, such comparisons can be misleading.

"Liu Xiaobo is not a politician, he's not a Mandela. He's an intellectual putting forward an alternative vision," he said.

But the Nobel Prize is rapidly changing all that. No longer is he simply an intellectual. He is someone standing on the shoulders of other activist giants; praised by the likes of the Dalai Lama and Czech dissident Vaclav Havel.

"He is a brave man who is not afraid to stand behind the truth even in an environment where it is dangerous, more dangerous than it used to be here," Havel said.

The Chinese government has tried to silence him. It has locked him away, but Liu Xiaobo's ideas refuse to be shackled.

Liu sits in a cell and won't be there to collect his award. But as he told CNN before he was jailed, his dreams of freedom -- for himself and for his country -- remain undimmed.

"If you can be well in prison, face it with a calm attitude. You can persist on this road and walk it to the end," he said.

A road, Liu Xiaobo, most assuredly does not walk alone.