China crackdown on dissent ahead of Nobel ceremony 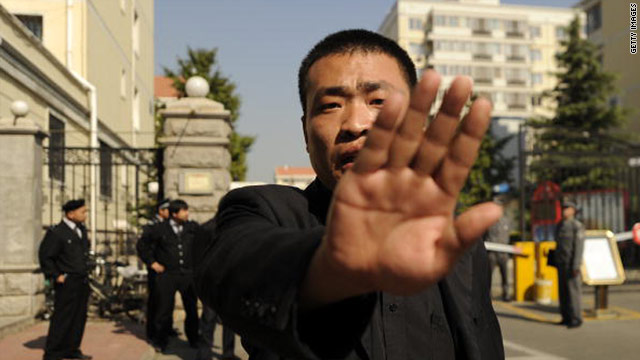 A policeman tries to stop photos being taken outside the house of the wife of jailed Chinese Nobel Peace Prize Laureate, Liu Xiaobo, in Beijing on October 13.
STORY HIGHLIGHTS

Beijing (CNN) -- Zeng Jinyan knows all too well what it was like to be a prisoner in her own home.

"Living under police watch for a long time and with all connections to the outside world cut off -- it was very painful and hard to endure," said the 27-year-old charity worker.

Zeng was not charged with any crime but was put under house arrest for several months in 2008 after police arrested her husband Hu Jia, a pro-democracy activist. Hu was later sentenced to three and a half years' imprisonment for "inciting subversion of state power."

Fellow activist Liu Xiaobo, this year's Nobel peace prize laureate, was convicted of the same crime on Christmas Day 2009 and is serving an 11-year sentence. Liu Xia, Liu Xiaobo's wife, has been under house arrest since the award was announced on October 8.

Liu Xiaobo's lawyer says that police have cut off all of Liu Xia's communications: she has no phone, no Internet access and is not allowed to meet with her husband's legal team.

"All these measures are against the law," said Mo Shaoping, a long-time legal counsel and personal friend of Liu Xiaobo. "Personal freedoms are enshrined in Chinese law."

Mo says police pressured his firm's previous landlord to evict them and ordered building management to install a surveillance camera outside their new office.

Rights advocates say, since the Nobel announcement, they have recorded dozens of other cases of increasing government harassment on activists -- from disrupting Christian group gatherings to jailing a father who organized a support group for parents of victims sickened by melamine-tainted milk.

In one telling example, Cheng Jianping, a human rights advocate, was sentenced to a year in a labor camp for "disrupting social order." Her alleged crime was re-tweeting her fiancé's post about an ultra-nationalist protest and adding a sarcastic comment.

"I think she was the first person in recent Chinese history to face criminal charges for using satire," said Lan Zhixue, her lawyer.

The authorities' apparent targets have widened beyond political dissidents to include other prominent figures, especially those whom officials consider are likely to attend the December 10 Nobel award ceremony in Oslo.

Artist Ai Weiwei and economist Mao Yushi told CNN separately that police last week stopped them at the Beijing airport from leaving China for activities unrelated to the Nobel prize, claiming their departure would endanger national security -- a first-time experience for both men, who travel abroad frequently.

"I don't understand their rationale -- they don't get anything positive out of this," said Mao, 82, a signatory to Charter 08, a manifesto calling for political reform and human rights in China co-authored by Liu Xiaobo, which landed Liu in prison.

"My experience only shows awarding the peace prize to Liu was the right decision," Mao added.

The Chinese government, however, insists that Liu Xiaobo is a common criminal -- and the Nobel award is nothing more than a Western plot against China.

"The Nobel committee's decision is an open support for criminal activities in China," said Jiang Yu, a foreign ministry spokeswoman. "It's a flagrant provocation and interference in China's judicial sovereignty."

Beijing is boycotting this year's Nobel ceremonies -- including the one held in Stockholm for scientific awards -- and has warned other countries of potential consequences if they attend the Oslo event.

Defending China's response to the peace prize, the Chinese ambassador to Norway, Tang Guoqiang, posted an unusually lengthy note on the embassy's website to explain why he thinks the award to Liu was a mistake.

"In China, people enjoy freedom of expression, provided that it is exercised within the limits of law," Tang wrote in both Chinese and English.

"The Communist Party and the Chinese government are quite capable of accepting criticisms and doing self-criticisms for improvement," he added. "It is just often overlooked by outsiders, especially the Western world."

State-run media has reported on the low recognition of Liu in China, without mentioning the government censorship on news about him -- including blacking out CNN's coverage and blocking related websites.

Global Times, an English-language newspaper published by the Communist Party mouthpiece People's Daily, said it had surveyed some 900 people on the subject and found more than 75 percent of respondents had no idea who won this year's peace prize.

"While the authorities can't control the news from getting to people really looking for it, they can prevent the vast majority of people coming across it so that Liu Xiaobo isn't so much of a household name in China as he might have been," said Rebecca MacKinnon, an expert on Chinese censorship with the Washington-based New America Foundation.

Strict censorship and other heavy-handed tactics are only putting the spotlight back on China's controversial human rights record, analysts say, and may be self-defeating in the long run.

Since few past winners of the Nobel Peace Prize were barred by their governments from attending the award ceremony, an empty chair for the recipient at this year's event would be "highly symbolic," said Nicholas Bequelin, Asia researcher for Human Rights Watch.

"When Chinese President Hu Jintao visits Washington in January, I don't think he would want to hold a joint press conference with President Obama," Bequelin said. "Because now you can almost be sure there would be a question about Liu Xiaobo."

With the government showing no sign of releasing Liu or of lifting his wife's house arrest anytime soon, the couple's supporters say they will try to watch the award ceremony online.

"This Nobel Peace Prize affirms the efforts of those Chinese who seek for a democratic China," said Zeng, the dissident wife. "For now, though, we are sharing the misery and difficulties together."

She says police still watch her 24 hours a day, by posting an officer in the lobby of her apartment building.

As the day of the ceremony draws closer, Zeng has started stocking up her refrigerator with food for her and her three-year-old daughter. Just in case, she says, the authorities place her under arrest again in her housing complex, called Freedom City.