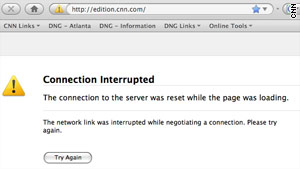 Beijing (CNN) -- On the eve of the Nobel Peace Prize award ceremony in Oslo, Norway, CNN.com and CNN International are among the websites and television networks that have been blocked in mainland China.

Q: There are reports that users in China can't access the CNN website and the websites of other news organizations. What's the situation in Beijing and across mainland China?

A: CNN.com is completely blocked as of today. Because when I use [a privately secured network] the site works ok. But if I'm using the normal broadband connection at home, that most Chinese have, an error message comes up. It says "this website is not available." It's sort of the standard thing that happens when a website is blocked here in China.

A: Every time our reports are broadcast about Nobel Prize winner [Liu, who is serving an 11-year sentence in a Chinese prison for what the government called "inciting subversion of state power"] the television screens black out. We are required to beam our signal through a Chinese satellite station before it is broadcast to mainland China. That creates a 12-second delay. Authorities use that time to black out specific parts of the signal. Whenever anything about WikiLeaks or the Nobel Prize is mentioned, the signal is blocked.

China cracking down on dissidents

Q: How common is this?

A: They've been doing this many years. Usually anything having to do with the "three Ts and one F" -- Tibet, Taiwan, the '89 Tiananmen Square protests, and Falun Gong, a spiritual group banned in China. The process had abated for the last several months, and especially right after the Olympics. But in recent weeks we've noticed the practice has become more frequent. But now when anything about the Nobel Prize or WikiLeaks as it pertains to China is reported, our stories are blacked out.

Q: Does this occur only in mainland China, or is it in Hong Kong as well?

A: I believe it's just mainland China, that's what they can control.

Q: How do Chinese authorities police this?

A: They watch our stories and read our stories very closely. They probably have written directives over what kinds of stories need to be censored. I doubt that people pushing the buttons know English very well. But they probably base it on certain video they see, or key words that they hear. I think it's emblematic of how tightly controlled this is, and how sensitive authorities are about tomorrow's award ceremony in Oslo.

Q: What are the Chinese sites saying about the Nobel Prize, if anything?

A: The authorities are also blocking certain websites that may be touching on this or WikiLeaks. I think it's safe to say that most Chinese are not aware of the [Nobel Peace Prize winner]. And whatever they may have read about him has been through official talking points and state commentary.

An update on the blackout from Jaime FlorCruz as of 0830 GMT Friday:

We have canvassed a few Chinese people -- students, functionaries, a homemaker, a filmmaker -- and have asked them to try to click on the CNN website using their regular broadband connections at home or in school. They tell us that the international edition of CNN.com is totally blocked. When they log on to CNN.com's U.S. edition, it loads fine until they click on any Liu Xiaobo-related stories and they get the standard notice: "This website is not accessible."