China ratchets up rhetoric ahead of Nobel ceremony 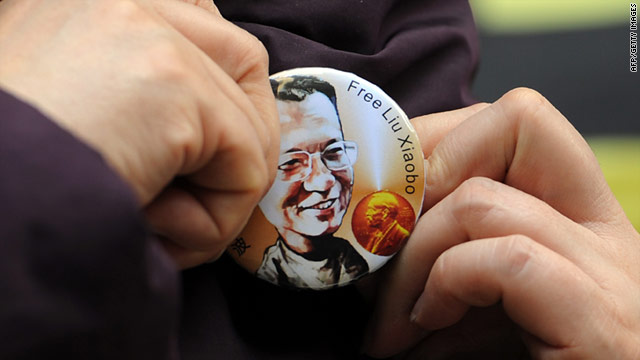 A woman wears a badge calling for the release of Liu Xiaobo outside the legislative council in Hong Kong on December 8, 2010.
STORY HIGHLIGHTS

Beijing (CNN) -- A day before the Nobel committee honors an imprisoned Chinese dissident with its peace prize, China ratched up the rhetoric calling the award "an interference" in its internal affairs.

"The Nobel committee has to admit they are in the minority," said Chinese foreign ministry spokeswoman Jiang Yu on Thursday. "The Chinese people and the overwhelming majority of people in the world are against this."

China has responded furiously since the Nobel committee announced its Peace Prize winner on October 8. Officials have repeatedly called Liu Xiaobo -- currently serving an 11-year sentence for "inciting subversion" -- a common criminal and the award a Western plot against China.

"Liu Xiaobo broke Article 105, a crime of instigating the subversion of state power," Jiang said Thursday. "He went beyond general criticism of the state."

"Developing country to country relations should follow certain principles," she added. "I think the Norwegian government should give careful thought to this."

Also, Amnesty International said it had received report that Chinese diplomats in Norway have been pressuring Chinese residents into joining anti-Nobel demonstrations when the award ceremony is held Friday.

However, the human rights group did not say how it learned of this, only offering that it has been "informed by reliable sources."

Several nations have indicated they will not attend the ceremony in Norway. The Nobel committee, which said it had sent out 65 invitations to embassies in Oslo, counted 19 countries that had declined so far -- including China, Russia, Saudi Arabia, Pakistan, Iraq and Iran.

Russian officials have said they are not going to attend the ceremony because its ambassador has a previous commitment.

Despite the Nobel committee's announcement that Iraq will not show up at the ceremony, an official said that might not be true.

Labeed Abawi, Iraq's deputy foreign affairs minister, said officials had not yet decided if they would attend the ceremony.