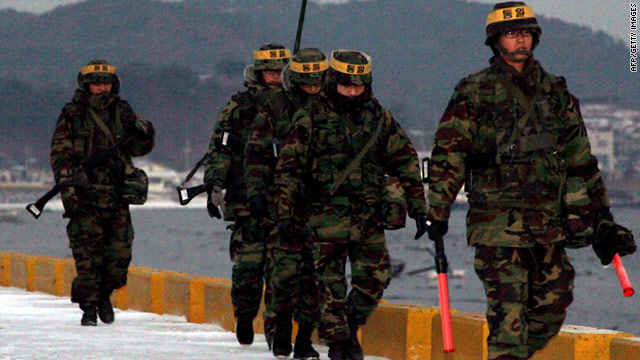 South Korean marines patrol along the wharf on Yeonpyeong island near the maritime border between the two Koreas.
STORY HIGHLIGHTS

(CNN) -- North Korea warned Friday it would launch a military strike against the South if Seoul goes ahead with live-fire drills near Yeonpyeong Island over the next five days, North Korea's state-run KCNA reported.

South Korea "should take a prompt measure to stop the planned provocative maritime shelling from Yeonpyeong Island," the report said. The Korean People's Army "will deal the second and third unpredictable self-defensive blow at them to protect the inviolable territorial waters of" North Korea "as it had declared before the world."

The Russian Foreign Ministry also warned against the drills in a meeting Friday among Deputy Foreign Minister Alexi Borodavkin, U.S. ambassador John Beyrle and Lee Younho, the South Korean ambassador to Moscow, according to a statement posted to the ministry's website.

The South Korean Joint Chiefs of Staff announced Thursday that the exercises will take place in the seas southwest of Yeonpyeong Island between December 18 and 21.

The South previously announced military exercises for this week.

Bill Richardson: Korea is a tinderbox

According to the Russian Foreign Ministry, Boradavkin reminded the U.S. and South Korean ambassadors at Friday's meeting that the November drill resulted in casulties and that canceling the drills was critical to avoid further possible escalation of tensions.

The U.S. military has said it is concerned that South Korea's exercises could spark an uncontrollable clash with the North, but the State Department said the exercises are not meant to be threatening or provocative.