By Nemo Kim, For CNN 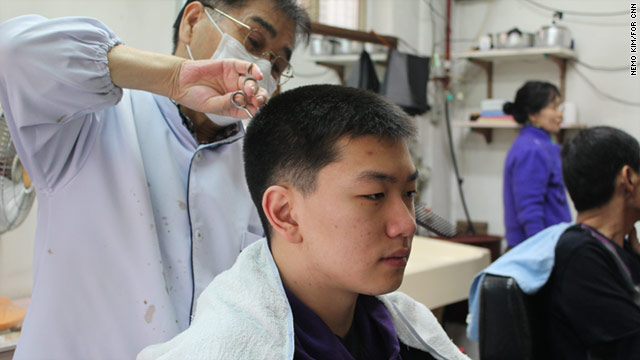 Jaehwan Lee, a 19-year-old English literature major, is due to begin his military duty once the university semester is over.
STORY HIGHLIGHTS

This sense of apprehension was clear on university campuses, with many young men worried about the prospect of an outright war. That's because many college students are due to start their military service after this semester and also because the two soldiers killed on Yeonpyeong Island last month were their age, 19 and 21.

"The two marines who died on Yeonpyeong were my age and I might be a victim, too. That makes me anxious. My mom's worried these days," said Jaehwan Lee, a 19-year-old English literature major who is due to begin his military duty once the semester is over.

South Korea is technically still at war with its communist neighbor. The 1950-53 Korean War ended with a truce but no peace agreement was reached. Under South Korean law, able-bodied young men must serve for about two years in the country's 650,000-member military. It is seen as a key part of the nation's defense against the communist North's 1.1 million troops across the border.

Richardson: We were 'very close' to war

Gallery: N. Korea: Life in a tinderbox
I used to think military service was something all Korean men do, not a big deal, but I think differently now. They're all someone's sons.
--Min-sun Lee, a mother
RELATED TOPICS

Conscription is a sensitive social issue in South Korea. Popular TV personalities have been removed from programs and politicians have lost elections when it was revealed that they or their sons evaded the duty through suspect measures.

Military records of public figures are constantly under public scrutiny and much suspicion is aroused when seemingly healthy-looking celebrities end up not going, citing health reasons or if they are assigned to do civil service instead of regular combat duty.

Human rights lawyer Oh Jaechang said conscientious objectors' refusal to participate in a military capacity poses no threat to national security, due to their small numbers.

"Many of them suffer from generation to generation, since all the men in the family end up criminals in the eye of society," Oh said. "They suffer economically and socially."

Many of those now preparing to serve are concerned about what may happen next on the peninsula. Tensions mounted between the Koreas on November 23, when North Korea shelled South Korea's Yeonpyeong Island. The attack killed two marines and two civilians, and injured 18 people. North Korea had accused the South of provoking the attack because shells from a South Korean military drill landed in disputed waters.

Tensions were already running high in the Korean peninsula after the March 26 sinking of the South Korean warship Cheonan in the Yellow Sea that left 46 South Korean sailors dead. An international investigation conducted by South Korean, U.S., Swedish, British and Australian officials blamed a North Korean torpedo for sinking the ship. North Korea has denied culpability.

"I was in the military when the Cheonan incident broke out, and that scared me a lot," said Hanuri Song, a 22-year-old who finished his service a few months ago. "I'm worried about my friends who are still there."

Over the past six decades, small-scale skirmishes have flared repeatedly along both land and sea borders. Deadly naval clashes occurred along the demarcation line in 1999, 2002 and 2009.

The current hostilities between the two Koreas come as the North is undergoing transition -- the ailing and reclusive leader Kim Jong Il is believed to be in the process of transferring power to his son Kim Jong Un. Some analysts believe upcoming internal changes have recently prompted North Korea to flex its military muscle.

Some troubles continue for the conscripts after they finish their service, such as for Song, who injured his back while lifting heavy artillery equipment during his time in the military.

"I'm physically unable to play basketball now. It's my favorite sport so I'll really miss that. But there are many who ended up much worse off than me. Some don't make it back home after their service so I shouldn't complain," he said, adding that daily contact with rifles can be hazardous.

Military service also takes a toll on the families.

"I was frantic with worry during the Cheonan incident," said Song's mother, 50-year-old Min-sun Lee. "It makes me tearful just thinking about the poor mothers of the Yeonpyeong boys. I used to think military service was something all Korean men do, not a big deal, but I think differently now. They're all someone's sons."

Military service has long been seen as a sacred duty of manhood. It also arouses a sense of bitterness and anger among ordinary Koreans who feel that a select few abuse the system. Many young Koreans, used to a comfortable lifestyle, feel that military duty is something that they have to endure, not how they would spend two years of their lives, given the choice.

Amid recent tensions between the two Koreas, South Korea's Ministry of National Defense announced last week that it would put a halt to a reduction of the army's mandatory military service period to 18 months, deciding to keep it at the current 21. The service period for the navy and air force will remain at 23 and 24 months respectively.

The previous administration cut the army conscription period from 26 to 24 months and had planned another reduction to 18 months by 2014, but critics have argued that this approach didn't take into consideration South Korea's aging population and ever-decreasing birth rates as well as the dangers of North Korean threats.

For some of the conscripts, getting their head shaved is an emotional part of their preparations to enlist. Most young men prefer to do this alone, away from family or friends. Before his visit to the barber shop, Lee kept stroking his hair.

"Getting my head shaved is like throwing my freedom away and entering a strange, new world. I didn't expect to feel like this," he said, visibly embarrassed about his new look.

"I'm trying to keep positive but seeing myself with the shaved head is a bit of a wake-up call. I guess I'm not a student any more, but a soldier.