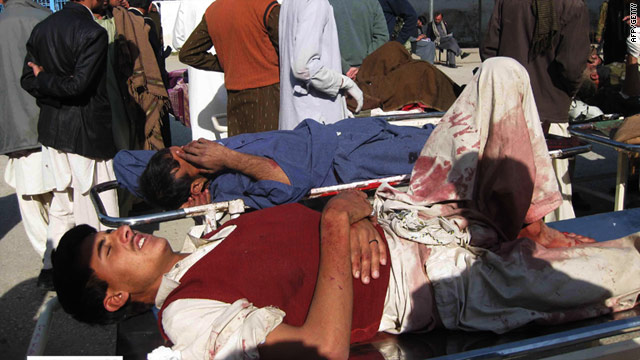 Paramedics treat some of the 105 injured victims of what is believed to be the first female suicide bomber to strike in the country.
STORY HIGHLIGHTS

Islamabad, Pakistan (CNN) -- A young, female suicide bomber was behind a blast in Pakistan that killed at least 46 people and injured 105 others at a food distribution point, an official said Sunday.

Zakir Hussain Afridi, the top government official in Bajaur Agency, Pakistan, said that the preliminary investigation into the explosion shows that a girl between the ages of 16 and 18 blew herself up. The determination was made from remains of the bomber that were recovered.

Azam Tariq, the central spokesman for the Pakistani Taliban, told CNN in a phone call that it targeted people who had formed what he called a pro-government and anti-Taliban group.

The blast took place about 600 meters from a U.N. World Food Programme distribution point at a security checkpoint in Khar, according to Amjad Jamal, a spokesman for the agency. He said that more than 300 people were going through a security screening to get food and other items at the time of the explosion.

Afridi said that the suicide bomber was in a burqa, a traditional full-body covering worn by some Muslim women. He said she was stopped for a security check at a checkpoint, where she detonated herself.

The Pakistani Taliban denied that the bomber was a woman.

"We have thousands of male suicide bombers ready who are keenly waiting for their turns. Then why would we use a woman, which is against the traditions of Islam?" the Pakistani Taliban's Azam Tariq said.