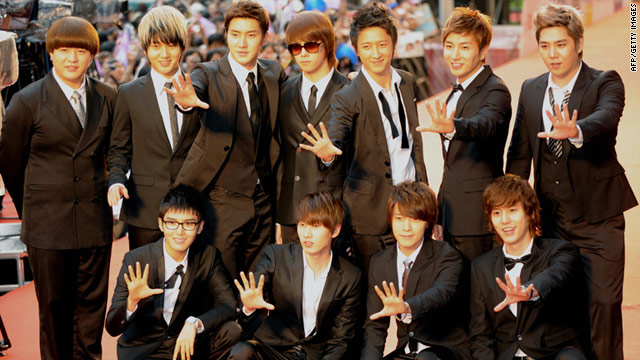 Super Junior is one of the most famous boy bands in Asia -- arguably even the world.
STORY HIGHLIGHTS

Shanghai, China (CNN) -- At the end of May, it was announced that a South Korean band called Super Junior would perform at the Shanghai World Expo. Free tickets would be released for those who arrived early on the day of the performance, which was scheduled for the evening of May 30.

On May 29, hundreds of fans, mostly young Chinese women, began lining up for tickets. By the next morning, that number had swelled to nearly 10,000, resulting in a scene so chaotic that police could barely control what turned into a stampede of thousands of girls clamoring for a chance to see one of the most famous boy bands in Asia, arguably even the world.

Super Junior is but one example of South Korean cultural exports, including popular music (called "K-pop") as well as television dramas, movies and video games, that have become wildly popular among young people across Asia.

Over the past decade, South Korea, with a population of around 50 million, has become the Hollywood of the East, churning out entertainment that is coveted by millions of fans stretching from Japan to Indonesia.

Koreans use the term "hallyu" to describe the phenomenon. It refers to the "Korean Wave" of entertainment that has swept across the shores of almost every single country in the region, even increasingly beyond. Some are now even referring to the trend as "hallyu-wood."

According to Sung Tae-Ho, a senior manager in the Korean Broadcasting System's content business office, part of the reason why the country's culture industry is so successful abroad stems from the fact that the content is high quality and also cheap, at least compared to entertainment that could be bought from other, particularly Western, markets. The Korean Broadcasting System, or KBS, is one of the country's four major television networks.

Culture also plays a role. Korean content, especially dramas, is as, if not more, popular than Western series because, simply put, Asians relate to it more.

"Even though the languages are different, we share an Eastern mentality. We respect the father and mother and a very hierarchical society and Confucianism," Sung told CNN.

"So based upon that cultural background, we exchange our emotions, what we think and what we feel. There is a low cultural barrier to crossover with our content. It is kind of a syndrome. Asian people love to enjoy Korean stuff."

Overall in 2009, the country exported nearly $3 billion in entertainment, more than double 2002 exports, according to an article on MK Daily, a Korean news portal. Today there are up to 400 independent studios creating content for domestic and international markets.

Korea's success as an entertainment exporter began in the late 1990s when its TV series began to be broadcast in Japan, China and Southeast Asia. The government has also backed the expansion of the country's culture industry abroad, seeing it as a vehicle for soft power -- a tool to boost Korea's reputation in the region.

"They start watching Korean drama on television and then after that come the pop songs from the boy bands. All of it has influence in Thailand," said Vorasuang Duangchinda, a professor at Sripatum University in Bangkok.

"After that, they become fans of everything Korean -- Korean food, Korean culture. Many of my students can even speak Korean because of [the entertainment]."

According to Duangchinda, Thai producers are traveling to Korea to learn how to make better TV shows while Bangkok is full of dozens of cosmetic shops offering services that promise to make young women look more Korean. The professor even has one student so obsessed with the country's pop culture she's renamed herself "Mee-so," which means "smile" in Korean.

"After she finishes her degree, she will further her education in Korea, and she also has a Korean boyfriend right now," he said. "Many young people are just crazy like this. Younger generations want everything Korean."

Yvain Lu, a graduate student in Shanghai, wears a purple jacket from a Korean clothing brand called Thursday Island. Her favorite K-pop band is called 2AM. Secret Garden, a drama about a man and a woman who go into the mountains and mysteriously change bodies with each other, and We Got Married, a reality show, are her favorite Korean TV programs. Song Hye Kyo is her favorite Korean actress.

Yet there is one problem with Lu's infatuation with Korean culture: Patronizing Korean culture is perceived as unpatriotic by some in China -- so much so that female fans of K-pop boy bands say they have to form password-protected online groups to fend off accusations that their fetish with cute Korean singers is anti-Chinese.

The backlash means Lu has to hide her infatuation. "I am not proud to tell people I love Korean things," she said. "It's complicated, actually. Just like Japan, Korea is not very friendly with us [China]. Many people think Korean series are silly."