By Agnes Teh, for CNN 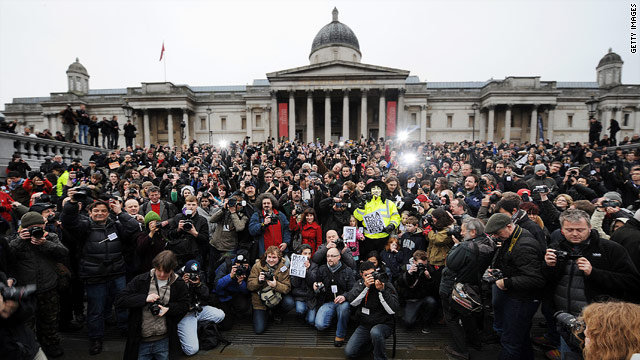 London, England (CNN) -- Photographers fed up with being stopped and searched by British police under the country's terrorism laws gathered in London to protest against the practice.

Waving placards with the message, "I am a photographer, not a terrorist," about 2,000 photographers called for more leniency from the British police.

The slogan is the name of a group set up to campaign against certain sections of Britain's Terrorism Act 2000, which was designed to give police greater powers to fight terrorism.

Photographers say they have been unduly targeted by Section 44 of the Act, which allow officers to stop and search people, regardless of whether they have reasonable suspicion of wrongdoing.

"We're coming together to show solidarity and to show that we won't be intimidated," said Jonathan Warren, a freelance photographer and one of the founders of the campaign group.

Warren said he was approached by police a couple of years ago while covering an anti-arms protest.

"I was waiting for the protest to start when I was stopped and searched, even though I had my press card and was an accredited photographer," Warren said.

"I showed it to the police, and they didn't believe me. They went through my bag and my pockets," he said.

A small number of police watched the protest Saturday in London's Trafalgar Square, but they maintained a low profile.

Some protesters wore police costumes and badges identifying themselves as "vigilance officers," amid frequent camera flashes. Mock "freedom wardens" also made their way through the crowd pretending to arrest photographers.

Britain's terrorism laws were dealt a blow last week when the European Court of Human Rights ruled that stop-and-search powers under Section 44 of the Act were a breach of human rights.

The ruling came after lengthy legal fight by two people who were stopped and searched on their way to a London demonstration.

The court found that the "coercive powers" of the anti-terrorism legislation amounted to a clear interference with the right to respect for private life. The British government is appealing the decision, saying the powers are an important tool in the fight against terrorism.

Another founding member of "I'm a photographer, not a terrorist," freelance photographer Jess Hurd, felt that she too had been unfairly stopped under Section 44.

She said these random checks have affected photographers' ability to work.

"I was stopped last year for 45 minutes covering a travel wedding," the freelance photographer said.

"Everyone, if they haven't been stopped already, knows someone who has been. This is becoming a problem. People stopped over sunsets at St. Paul's, chip shops, roundabouts -- it's getting a bit crazy.

"I would personally like a repeal of this law," Hurd said.

"It's absolutely outrageous that the terrorism act is being used to stop photographers from doing their job," said another participant, freelance photographer Adam Woolfitt.

"My message is stop. Leave us alone," Woolfitt said. "We've got a job to do."