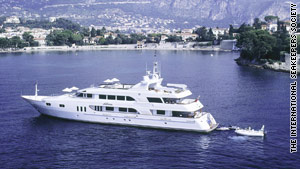 But sexy or not, the International SeaKeepers Society, of which Moore is chairman, has amassed a colossal amount of data about the oceans since it started 10 years ago.

It's an enormous amount of information that represents six percent of the world's weather data, according to American federal agency, the National Oceanic and Atmospheric Administration (NOAA).

It's data that the global scientific community would otherwise not have at their disposal, and all because a group of superyacht owners have agreed to host the SeaKeeper data collection systems on their boats.

Specialized equipment known as the SeaKeeper 1000, installed aboard more than 30 superyachts, is constantly in the process of collecting measurements on ocean oxygen levels and pH balance, barometric pressure, wind speed, and much more.

Each day, these units collects 14,400 measurements each.

The International SeaKeepers Society traces its roots to 1997, when two Los Angeles-based businessmen interested in installing scientific data-collecting equipment aboard yachts approached Jim Gilbert, then the editor of premiere U.S. yachting publication, ShowBoats magazine. They did so because they concluded that superyachts often venture where research vessels don't.

Gilbert, a conservation advocate and now the board president of SeaKeepers, was glad to help spread the word. He liked the idea that the SeaKeeper technology would "turn a yacht into a research platform," he says, instead of just asking owners to write a check.

He spent a few months meeting with captains and owners to gauge the difficulties of finding room for and installing the equipment. Consensus held that it was feasible and the society was formed in 1998.

It took some time to adapt the equipment to interface with the yachts' communications systems, so the data could be transmitted, but by 2001, five owners -- among them Paul Allen, the Microsoft millionaire who owns "Meduse" and other yachts, and Alfred Balm, a Calgary businessman who owns "Silver Living" -- were helping to collect oceanic and atmospheric data.

The monitoring device they use is called the SeaKeeper 1000. It collects data, measuring ten parameters governing the weather, climate and ocean every minute, using sensors that sit on the hull of the yacht.

This data is then transferred to the boat's "satcom" or satellite communications equipment, allowing a snapshot of the data readings to be sent every three hours to NOAA.

NOAA realizes the value of the information SeaKeepers provides. According to SeaKeepers, the cost of just chartering a boat to carry out research on can hit $25,000 a day.

"If you randomly call any scientist and ask what it costs them to go out on a data-collecting mission, you will be floored," Moore explains, adding that Bob Ballard, the renowned ocean explorer who discovered the wreck of the Titanic, told him it is customary for research trips to cost $1 million.

Once the NOAA receives the data, it provides the information to the World Meteorological Organization (WMO), the United Nations agency responsible for providing international co-operation on weather, climate and related environmental issues. The 188 WMO member countries can access the information they want for free.

SeaKeeper 1000's measurement of the pH balance of the oceans has helped scientists in the world's northern climates who recently discovered that the shells of mussels and clams in their waters are thinning.

Other scientists are seeing changes in the ocean's pH balance just a few meters below the surface -- changes that they didn't expect to see for another 100 years, quickened because of carbon being absorbed by sea life.

Someone has to fund these discoveries: Superyacht owners pay a $75,000 membership fee, with an additional $10,000 in annual dues to cover maintenance and calibration of the SeaKeeper 1000.

The membership fees cover manufacture and installation of the monitoring equipment, which costs $40,000 for the bespoke products. The funds also help researchers in their efforts to develop sensors to measure as yet uncollected data on red tide, heavy metals, and other ocean ailments.

Owners aren't the only ones donating to the cause. Many builders and suppliers from the yachting world -- Oceanco, Lurssen, Azimut-Benetti, and Trinity Yachts -- are "Yacht Partners" helping to recruit new members from their clients.

There's also SeaKeepers Professionals, a membership tier open to superyacht captains and crew. The owners' influence is causing politicians and government officials worldwide to listen, and an additional 25 vessels, from cruise ships to icebreakers how have the equipment installed.

Members of the SeaKeepers board acknowledge the conversation over climate change is highly charged. Moore points to a recent article in The Wall Street Journal that discusses how the computer models predicting global warming versus global cooling are only as accurate as the data they're fed. It references the difficulty of ocean monitoring, due to its vastness and the associated costs. "The conversation has evolved squarely into SeaKeepers' mission," Moore says.

Diane M Byrne is the owner and editor of Megayacht News. See megayachtnews.org