Dutch role in Afghanistan in doubt as government collapses 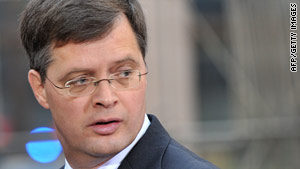 (CNN) -- The future of around 2,000 Dutch soldiers serving in Afghanistan has been thrown into doubt by the collapse Saturday of the Netherlands' coalition government.

Dutch Prime Minister Jan Peter Balkenende's office said in a statement that the Labor Party had withdrawn from the government following days of talks over whether the troops should be brought home.

Balkenende's center-right Christian Democratic Alliance had hoped to keep the country's troops in Afghanistan as part of NATO's International Security and Assistance Force beyond an August deadline for their return.

The Netherlands currently has 1,950 troops serving in Afghanistan's Uruzgan province as part of NATO's International Security and Assistance Force, according to the ISAF Web site. The Dutch government extended the military mission by two years back in 2007.

But the Labor Party, led by Deputy Prime Minister Wouter Bos, opposed fulfilling NATO's request to extend the mission again. Bos said that the current Afghanistan policy was not sustainable, according to the official ANP news agency.

In a statement to reporters, Balkenende said there was no longer a "fruitful path" for the near-three-year-old coalition between the CDA, Labor and the Christian Union to go forward.

He said he would meet Queen Beatrix, the country's head of state, later Saturday to offer the resignations of the 12 Labor members of his cabinet and "make available" the 12 cabinet positions held by his own party and three held by the Christian Union.

The move is expected to trigger early general elections in the country.

Balkenende has led a succession of coalitions since becoming prime minister in 2002. The CDA, Labor and Christian Union entered into a coalition agreement in February 2007 following elections in November 2006. But the three parties have disagreed on several issues including Afghanistan.