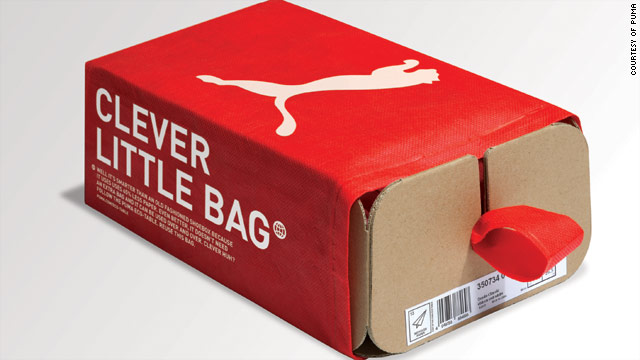 London, England (CNN) -- Spending 21 months redesigning a shoebox might not seem like the most effective use of a person's time, let alone a multinational company.

The "Clever Little Bag," which was unveiled Tuesday at a press conference at the UK's Design Museum in London, aims to cut paper usage by 65 percent and lower manufacturing waste by 60 percent.

The new packaging system has been created for Puma by industrial designer Yves Behar, the Swiss-born founder of the San Francisco design studio, fuseproject, and creator of the jawbone bluetooth headphone and One Laptop Per Child computer.

The bag -- made from recycled plastic -- encases a single sheet of ink-free recycled cardboard. When the bags are made available in the second half of 2011, customers will be encouraged to reuse the bag and recycle the cardboard.

In coming up with the final design, Behar made 40 prototypes and completed over 2,000 sketches. He hopes it will change not only what Puma does, but also the rest of the sportswear industry.

The concept may not look like a radical departure -- looking as it does like a bag covering a traditional cardboard shoebox -- but Behar had to design something that works within the existing framework of distribution centers, manufacturing networks and store rooms. He says it is a starting point.

"Eventually, we hope that everyone will be able to use the bag only but we first need to prove it can function in the existing system," Behar said.

The bag, and an earlier prototype, are currently on display as part of the Design Museum's new exhibition (sponsored by Puma) "Sustainable Futures -- Can design make a difference?" which runs until September.

"For me sustainability is the biggest opportunity to make a difference as a designer. It can elevate our profession to a place of real strategic change and address 21st Century issues," Behar said.

The launch of the bag is part of a wider company strategy to improve environmental practices and Puma CEO Jochen Zeitz took the opportunity to explain "PUMAVision" which was launched in 2009.

"We believe that to champion sustainability we have to walk the talk ourselves and today we are announcing that Puma will be reducing carbon, energy, water and waste by 25 percent," Zeitz said at a press conference.

Furthermore, Zeitz announced the introduction of a Puma Sustainability Index called "S-Index" which he hopes will serve as a "production benchmark" and provide a "seal of assurance" to customers about the company's commitment to sustainable practices.

What the "S-Index" means in practice is a pledge to increase the amount of sustainable materials (organic cotton and non-toxic substances) in their products to at least 50 percent by the same date.

Puma was famously set up by Rudolf Dassler in 1948, after a feud with his brother Adi and is the third largest sportswear company in the world behind Nike and Adidas.

Zeitz, who has been Puma's CEO since 1993, hopes that the German company and its rivals can set their differences aside and agree on a single "sustainability" standard which consumers can easily measure and understand.

"We want to start a dialogue with others in the industry and in the long run hope it will lead to a standard that everyone can live by and accept," Zeitz said.

Michael Warhurst, senior waste and resources campaigner at Friends of the Earth welcomed Puma's plans but urged governments to take a stronger lead.

"It's good that companies are looking at these things, but the best way to really get things moving on packaging -- both the reduction and making sure it gets recycled -- is to make sure governments put strong targets on recycling," Warhurst told CNN.

"Firstly, they need to make sure that companies are obliged to make their stuff easy to recycle. Secondly, that people have good recycling facilities and thirdly, that it is expensive to dispose of waste either by landfill and incineration."