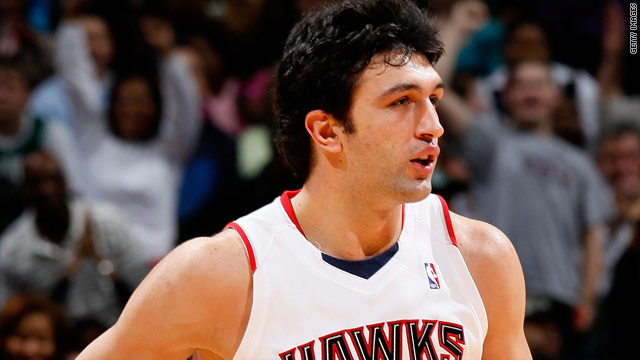 Editor's note: CNN's new series i-List takes you to a different country each month and highlights innovation and influence in business, technology, culture and more. In April, we visit the Republic of Georgia.

Atlanta, Georgia (CNN) -- Zaza Pachulia is a sporting hero in his home country -- the basketball player has gone from shooting hoops in the Republic of Georgia to playing in the NBA in Atlanta, Georgia.

Standing at 6 feet 11 inches tall, Pachulia looks like he was born to play pro basketball. Indeed, the sport is in his blood: His mother was a professional basketball player in the Republic of Georgia and once played for the Soviet national team.

Growing up in the Georgian capital of Tbilisi while it was still part of the Soviet Union, Pachulia followed her example.

"My mom used to be a basketball player so I was really into it," he told CNN. "Plus of course my height made it easier for me to decide what kind of sport I wanted to play, so at the age of nine I went to my first basketball practice."

Five years later he was talent-spotted by the Turkish basketball federation, which was in Georgia accompanying the Turkish national team. Aged 14 Pachulia moved to Turkey to play with the development team for Istanbul club UlkerSpor.

"That was the biggest moment for my life and career, because in that situation, moving to another country for a 14-year-old kid, that was a serious thing," said Pachulia.

"Plus I'm the only child in my family so that was a tough call for my parents as well. With that move we basically made basketball our number one priority."

"My goal was like to play in the NBA. I didn't want to leave my country, my people, my friends -- even my school. If I was going there I would go to reach that goal."

Pachulia nearly returned home the next year, following the death of his father, but he decided to stay in Istanbul. In 2000, aged 16, he graduated to the full team, becoming one of the youngest players in the Euroleague. In 2003 he entered his name in the NBA Draft and was selected by Orlando Magic.

Since 2005 he has played for the Atlanta Hawks, but Pachulia retains strong ties with his homeland.

Pachulia is involved in charity projects to help children in Atlanta and in his homeland to equip and train youth basketball teams.

"It's definitely important to never forget where you're coming from, where you were born and raised," he told CNN.

"After the season I always go back to my country and try to make the kids happy. That's the best feeling for me, when I see those smiling faces on the kids and you know how excited they are. I can tell you I feel the same way ... and that's a great feeling."

At the end of the NBA season, Pachulia also returns to his country -- where he is captain of the national team -- to play basketball.

"Every summer I go back to my country," he says. [I have] so many friends and family members. It's so far from Georgia to Georgia that not everybody can afford to come here, people are working there or they can't leave family, so I miss them and they miss me."

"I'm so nervous and excited to play for the national team. It's a great feeling in front of your fans, [in] the place where you were born and raised, and the friends come and see your game because you're not going to see them until next summer," he added.

Last year, Pachulia bought an Atlanta restaurant and has introduced one of Georgia's most traditional products to the menu -- its wine.

"A lot of people don't know about my country but it's really old. [There's] a lot of history, a lot of tradition, especially from the wine side. Wine there is really one of the best in the world ... so that's why I wanted to give people a chance to try this Georgian wine."

"I'm sure people will like it. There are some states actually selling it but we don't have any in Atlanta, Georgia, so we are really excited to be one of the first restaurants to have Georgian wine."