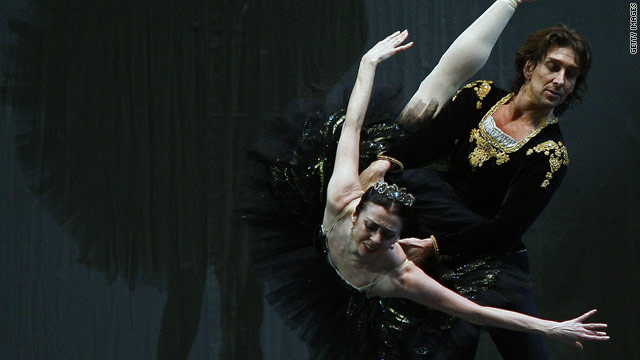 Tbilisi, Georgia (CNN) -- The State Ballet of Georgia is in rehearsal.

Dancers dressed in a motley mix of leg warmers, tights and athletic gear stretch on the floor and pull at the bar. Though exhausted after arriving the previous night from a six-week tour of Japan, these men and women warm up with the ramrod-straight posture of artists who have devoted their lives to the study of movement.

They snap to attention when the ballet's artistic director, Nina Ananiashvili walks in. She makes her entrance with the flair one would expect from a star of international ballet whose remarkable career outlasted an empire.

Dressed in blue track pants, a blue tee-shirt bearing the logo "State Ballet of Georgia," and a matching blue scarf wrapped around her slender shoulders, Ananiashvili snaps her fingers, announcing "Aaaand, one!" A pianist starts playing a jazzy cakewalk, as Ananiashvili coaches her dancers through their exercises in a cocktail of English, Russian and Georgian.

"Little Nina, don't turn your leg like that," she says in Russian pointing to one ballerina. "Willy, head!" she warns a male British dancer.

Periodically, Ananiashvili joins in, spinning and swaying with the music ... then rubbing at her neck, which she says she injured during the troupe's tour of Japan.

On a sunny afternoon in Tbilisi last March, Ananiashvili began making plans with friends to go to the city's ancient sulfur baths, to treat her sore neck.

"I don't know how many years I can continue [dancing]," she says. "Its hard and difficult if you don't do this systematically...if you don't dance three months and then you dance, this is bad."

Asked whether she will still be able to perform the lead role in "Giselle" 10 years from now Ananiashvili says "I don't think so!" and then bursts out laughing. "I'm 26 years old!" she says with a smile. "I will be very soon 27."

I remember when I first went to Paris. The lights were so beautiful but it made me sad, because I knew my people could never see them.
--Nina Ananiashvili, ballet dancer
RELATED TOPICS

The New York Times ballet critic James McCaulay gushed over her lead performance in the American Ballet Theater's production of "Giselle" last summer, writing: "How easily she takes to the air; how beautifully energy flows down the ravishingly long limbs of her physique (and, apparently, beyond)."

Born in Tbilisi when Georgia was still part of the Soviet Union, Ananiashvili was a child figure skating champion. She moved to Moscow aged 13 to study ballet.

Because she came from one of the outlying Soviet republics, Ananiashvili says she was initially grouped with weaker dancers who were recruited to Moscow by quota, rather then talent. But, she says that allowed her to study with a better teacher who had fallen out favor with managers of the ballet school.

By 1981, the Georgian ballerina was soloing with the Moscow Bolshoi Ballet and touring the world at a time when few Soviet citizens were allowed to travel outside the country.

"I remember when I first went to Paris. The lights were so beautiful. But it made me sad, because I knew my people could never see them," Ananiashvili recalls. "I never imagined one day our buildings here in Tbilisi would have the same lights."

The collapse of the Soviet Union allowed Ananiashvili to bring her talents to other ballet companies around the world. In 2009, she completed a 16-year run as prima ballerina with the American Ballet Theater in New York.

Though Ananiashvili is a product of the Soviet Union's most elite ballet schools, she insists Georgians bring something different to dance, and art in general.

"The people inside are very artistic," she says. "They are singing, dancing. It's in the blood."

Quiz: How much do you know about Georgia?

In 2004, the veteran of the stage was presented with a very different challenge. The newly-elected Georgian president, Mikheil Saakashvili, personally asked her to help rebuild Georgia's struggling state ballet.

"It was a difficult choice," Ananiashvili recalls. "The entire situation in Georgia was difficult, not just ballet. Everything was crashed down. There was no electricity in this city ... no money, no salary."

As artistic director, Ananiashvili lent her celebrity and her considerable contacts in the world of international ballet, to expand the company's repertoire and bring in foreign talent.

Today, the 114-year-old Tbilisi opera house where the ballet performs is undergoing a costly renovation. General director David Sakvarelidze boasts that the project is being entirely funded through private sponsorship.

Ananiashvili has a seven-year-old daughter, named Helene, and a husband, who happens to be the foreign minister of Georgia.

The ballerina believes she has a role to play as cultural ambassador for the tiny country that has suffered through four wars in 19 stormy years of independence. It is a diplomatic dance that Soviet artists learned to perform in the 1980s.

"We show other people not just the bad news they hear about Georgia," she says. "I love to show everybody we are a beautiful country, we are beautiful people, and we have classical ballet and classical arts. And we welcome anyone who wants to come into our country. So this is our message to the world."