President Saakashvili: We have had 'miraculous transformation' 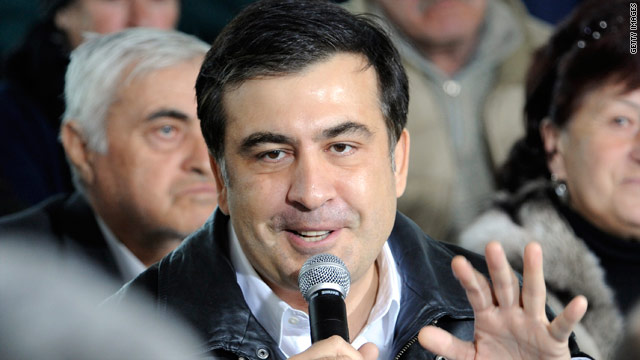 (CNN) -- The Georgian President has praised the citizens of the former Soviet republic for the "miraculous transformation" of the country.

Mikhail Saakashvili said his government had helped, but praised "the talent and hard-working nature of the people" for "an amazing achievement," in an interview with CNN's Jim Clancy.

Asked what Georgia's greatest resources were Saakashvili said:"The standard answer would be people and nature, but it is people and nature. This was a country that was considered to be failing years ago and [now] it is making it."

Saakashvili was re-elected as President of Georgia in 2008 after taking over from his predecessor Eduard Shevardnadze in 2004 following his leadership of the "Rose Revolution" protests.

He said Georgia needs to "bring back the best of the past, but also show the way to the future."

"It's about education, healthcare, opportunities, democracy, social transformation, meritocracy which can reverse the old corrupt, planned society that we inherited from Soviet times," he added.

Georgia gained independence in 1991 but relations with Russia since have been strained.

In August 2008, Georgian troops entered the breakaway Russian-speaking region of South Ossetia, after sporadic clashes between ethnic Russians and Georgians. South Ossetia had declared independence from Georgia in the early 1990s.

Georgia's move prompted Russian troops to enter South Ossetia and then push deep into the rest of Georgia. Each side blamed each other for the conflict but an eight-month European Union-commissioned inquiry concluded that both sides shared the blame for the conflict.

Thousands of Georgians remain displaced and there is pressure on Saakashvili to repair relations with Russia.

He told CNN that Georgia "would be crazy to want hostilities with big, big Russia" and it was "the last thing any Georgian would want."

Another ongoing problem for the president are the numbers of Georgians -- especially young people -- leaving the country.

And Georgians have had to endure high levels of depravation for several years with over half the population living below the poverty line.

But this is being addressed Saakashvili says. "We had 52 percent living in poverty. Now it is 22 percent."

Saakashvili says Georgia will soon (before the end of his presidential term in 2013) have visa-free access to the European Union.

"I'm not afraid people will leave because I expect more to come back. This is the first former Soviet country where I think the entire political class has been replaced. And from that point of view Georgia is an attractive place for people to stay."