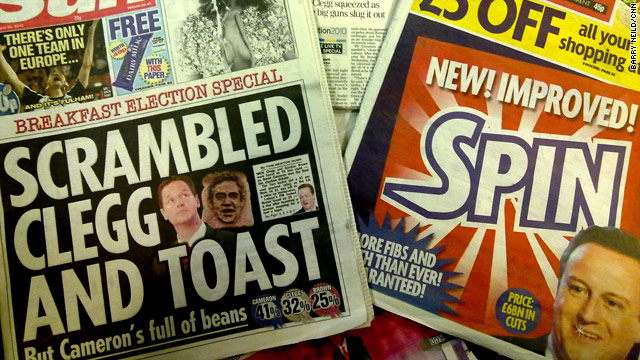 London, England (CNN) -- Gordon Brown looked like a mouldy cheese, David Cameron a fleshy buttock and Nick Clegg a scrambled egg. Britain's newspapers pulled no punches as they summed up the last of the country's pre-election leadership debates in typically ribald fashion.

With the partisan press in broad agreement with opinion polls that handed victory in the third televised encounter to Conservative leader Cameron, many dwelled on Prime Minister Brown's failure to revive his chances ahead of the May 6 vote.

And for some there was disappointment that more was not made of the now-notorious gaffe that saw Brown caught on tape calling a supporter of his Labour party -- an elderly woman by the name of Gillian Duffy -- "bigoted."

The Sun newspaper, a Rupert Murdoch-owned tabloid that has declared its backing for Cameron, gave its reaction in image form, picturing Brown's face burned into a piece of bread under the headline "Scrambled Clegg and Toast."

"[Cameron] ran rings round exhausted Gordon Brown and increasingly rattled Clegg as they traded blows over the economy," Sun Political Editor Trevor Kavanagh wrote. "The Tory [Conservative] leader looked like a real prime minister in waiting as he laid out his plans on tax, spending and bank reform.

"Like a tired old stag cornered by two young bucks, Mr. Brown put his head down and charged," he added.

The left-wing Daily Mirror front paged an image of Cameron next to a soap powder box bearing the words "New! Improved! Spin." Another headline added: "More fibs and froth than ever! Guaranteed."

The paper described Cameron as a "slippery salesman" trying to "soft-soap the electorate on the economy."

More surprising was a headline on the front page of the Guardian, another left-leaning paper, which handed unequivocal election victory to Cameron and his Conservatives. "Barring an earthquake, Tory leader is on his way to No. 10 [Downing Street]," it said.

The Times newspaper gave a more even-handed account insisting there was no clear winner, but hailing a "thrilling finale to a new political sport."

Times reporter Ben Macintyre wrote: "Three men in suits standing on stage is hardly a visual feast and yet, the debates have left indelible images: Clegg one hand casually in pocket, the confident new boy; Cameron in the second, coloring with anger as he chopped the lectern and accused his rival of lying and Brown in the third, face as granite grim as an Easter Island statue."

The Independent expressed sympathy for Brown, saying he put on a decent show despite a trying week. It's headline: "Floored by Mrs Duffy, battered by the media, counted out by pollsters, Gordon Brown last night came out fighting."

"Given he was in political hell 24 hours earlier, and that his economic polices are closer to what are required... [Brown] deserved to score better last night," wrote political commentator Steve Richards.

The paper agreed Cameron had won, but said Liberal Democrat leader Nick Clegg -- whose success in the debates has elevated his party from underdog to serious contender -- was overall victor of the three encounters.

The Daily Telegraph -- a pro-Conservative broadsheet -- gave its verdict with the headline: "Cameron on the money."

Writer Benedict Brogan said the opposition leader had "saved his best for last" as Brown struggled to shrug off his bad week.

"The memory of Gillian Duffy hovered over the proceedings," he said. "Mr. Brown tried to fend her off by admitting in his opening statement that 'I do not get all of it right'. But viewers will have seen a face tormented by the horrors of the previous 48 hours.

"Mr Cameron, by contrast, looked fresh and ready to lead."

Guardian writer Marina Hyde was crestfallen that the memory of Duffy failed to push Brown to disgrace himself further or inspire his rivals to sneak in a couple of scripted jibes at his expense.

"There was disappointment for those who had switched on in the expectation that Gordon Brown would accidentally call one of the audience a rancorous old Nazi or something and indeed for those expecting a decent microphone gag," she said.

"Mr. Brown was white, shaky, wan. Stumbled on his words. Not a well man," he wrote, adding: "His cadaverous complexion acquired a blueish tinge: Refrigerated stilton."

But by far the most surreal image of the night was from Caitlin Moran, writing in the Times, who described Cameron (previously criticized for appearing airbrushed in campaign posters) as "looking very much like a single buttock with two eyes stapled to it."