French trader on trial over alleged $6B fraud 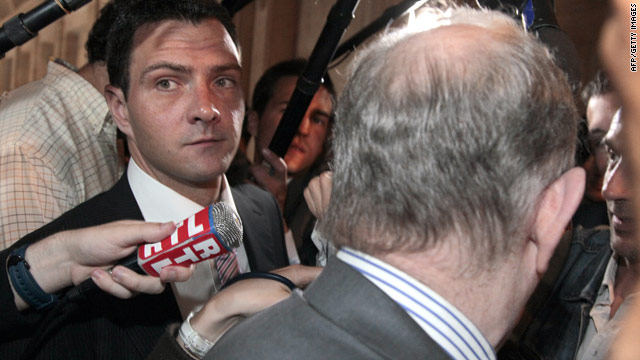 Paris, France (CNN) -- The trial of a French trader accused of wracking up almost $6 billion in losses through authorized trades opened in Paris Tuesday.

The 33-year-old, who is free on bail, was arrested in 2008 after Societe Generale unveiled trading losses of nearly €5 billion ($5.9 billion).

The bank attributed the losses to fraud by Kerviel, who traded European index futures for the bank.

Kerviel strenuously denies the charges, claiming that he wasn't the only one flouting the rules and did so with knowledge of his superiors.

"I am convinced the criminal file is full of elements proving that my superiors knew and covered for me. At least I shouldn't be the only one in the dock," he told CNN after the release of his memoirs, "Trapped in a Spiral: Memoirs of a Trader," in which he pleads his innocence.

"During three years these managers earned colossal amounts of money out of bonuses based on the ever growing results that I was making for the bank," he said.

Societe Generale says that at no time were supervisors aware of Kerviel's allegedly unlawful activities.

"It doesn't make any sense to say that the bank knew, because if the bank had known why would Kerviel have done all that to conceal his positions, whether that was transactions or results," she added.

Kerviel's lawyers are expected to call 33 defence witnesses, some of whom will describe the atmosphere in the trading room. In his book, Kerviel likened it to a "house of prostitution" where traders were encouraged to make money regardless of the rules.

Kerviel is the only person being tried over the multi-billion dollar losses. His assistant, Thomas Mougard, was cleared last August of all charges relating to the alleged fraud.

At the time the losses were made public, Societe Generale's missing millions ranked as one of the world's largest trading scandals. Shortly after announcing the "rogue trading" loss, the bank revealed a multi-billion dollar writedown due to the U.S. subprime mortgage crisis. The collapse of Lehman Brothers followed, fueling the wider global financial crisis.

Societe Generale's revelation of the unexpected loss along with the subprime writedowns shook confidence in the bank's leadership under chairman and chief executive Daniel Bouton and his co-chief executive Phillipe Citerne.

Both offered their resignations over the losses but were rebuffed by the board. Bouton eventually left in April 2009, almost one year after relinquishing his role as chief executive amid fierce criticism of his performance.

In a five-page statement released in late January 2008 when the alleged fraud was announced, Societe Generale said Kerviel started working at the bank in 2000 and spent his first five years there overseeing traders.

"Consequently, he had a very good understanding of all of Societe Generale's processing and control procedures," it said.

He later became a trader for the bank involved in arbitrage -- the practice of buying a portfolio of financial instruments in one market and selling a similar offsetting portfolio at the same time that had a slightly different value. The idea is that, in such trades, the risk of major loss would be minimized.

In fact, Kerviel's first portfolio of financial instruments -- in his case futures -- included genuine operations -- but the offsetting portfolio proved to be "fictitious," the bank said.

"As a result, the trader was able to hide a very sizable speculative position, which was neither consistent with nor related to his normal business activity for the bank," Societe Generale said.

It said around mid-January, bank officials detected "abnormal counterparty risk," and Kerviel's explanations led to additional controls being placed on his activities.

An investigation began on Friday, January 18 and the bank said the next day the trader had admitted to "committing unauthorized acts and, in particular, creating fictitious operations."

By early afternoon on Sunday, January 20, the bank's fraudulent position had been calculated at approximately 50 billion euros, which was worth $73.6 billion at the time but is now closer to $59 billion due to the weaker euro.

The process of unwinding the allegedly fraudulent claims coincided with falls on Europe and Asian markets, exacerbating the loss.

By January 23, 2008, "the unwinding" was completed and the total loss calculated at 4.9 billion euros ($5.8 billion). At the time, the figure converted to a dollar figure of around $7.2 billion.