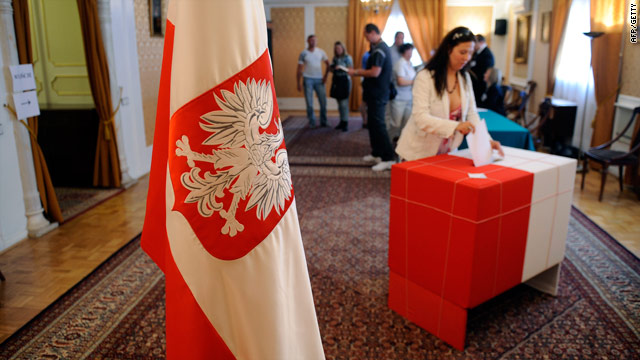 A woman casts her ballot in a polling station in Madrid during Poland's presidential elections.
STORY HIGHLIGHTS
RELATED TOPICS

The leading candidate, interim President Bronislaw Komorowski, failed to garner more than 50 percent of the vote, which would have clinched victory in the first round of voting to replace President Lech Kaczynski, who was killed in a plane crash in April.

The election pitted Komorowski, the parliament speaker who has been acting president since the crash, against Kaczynski's twin brother, Jaroslaw Kaczynski.

According to exit polls, Komorowski had 45.7 percent of the vote to Kaczynski's 33.2 percent. If those polls are accurate, a second round of voting will be needed to decide the winner. That election would likely take place July 4.

The two were among 10 candidates in the election originally planned for the autumn but brought forward after Kaczynski died.

Jaroslaw Kaczynski, once prime minister, is a divisive figure in Polish politics. His far-right Law and Justice party runs on a nationalist platform with the slogan, "Poland comes first."

"We have been on this road for 21 years together and we have been right," Komorowski said on the campaign trail. "We have been moving toward democracy and navigating our way in a free economy."

The tragic death of the president and recent fatal floods in southern Poland -- which left at least 20 people dead and caused hundreds of millions of dollars in damage -- have meant a tame presidential campaign.

Political analyst Radoslaw Markowski described the race as "less aggressive" and said the candidates have avoided straightforward debate. Though the president in Poland is primarily a ceremonial figure, he has the power to veto laws, thus helping to shape politics.

The president, his wife and more than 90 others were killed in western Russia on their way to the 70th anniversary of the Russian massacre of Polish prisoners of war in the village of Katyn.