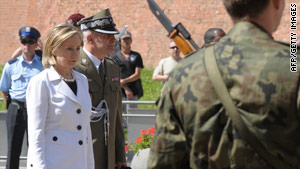 Speaking at the Schindler Factory Museum in Krakow, Poland, Clinton said the contribution will go to preserve the site of the concentration camp and "demonstrates America's commitment to Holocaust education, remembrance and research," the State Department said.

Some 1.1 million people perished at the Auschwitz-Berkenau concentration camp.

Because the camp was initially constructed as a temporary place, the buildings and other artifacts at Auschwitz-Birkenau are deteriorating, the State Department said.

If approved, the funding would be provided over five years starting in 2012.

The United States encouraged other nations to follow suit and contribute to the fund to preserve the site for future generations, the State Department said.

More than 1.3 million people visited the museum and memorial at Auschwitz-Berkenau in 2009.

"This agreement marks an important step in our countries' efforts to protect our NATO allies from the threat posed by the proliferation of ballistic missiles and weapons of mass destruction," a joint statement from both governments said.

The Strategic Arms Reduction Treaty signed in April by President Obama and Russian President Dmitry Medvedev cuts the total number of nuclear weapons held by the United States and Russia by about a third. Specifically, it fixes a ceiling for each country of 1,550 nuclear warheads and 700 deployed nuclear delivery vehicles.

The United States abandoned the Nixon-era Anti-Ballistic Missile treaty under the Bush administration in 2001 and has been experimenting with missile defense systems extensively since then. While tests of short-range and sea-based systems have been largely effective, longer-range systems aimed at protecting the U.S. homeland have a mixed record of success.

The Obama administration scrapped the Bush administration's plan for a European-based missile defense system based in Poland and the Czech Republic, proposing instead a more limited system aimed at defending against possible attacks from rogue states like Iran. Both proposals have drawn opposition from Russia.