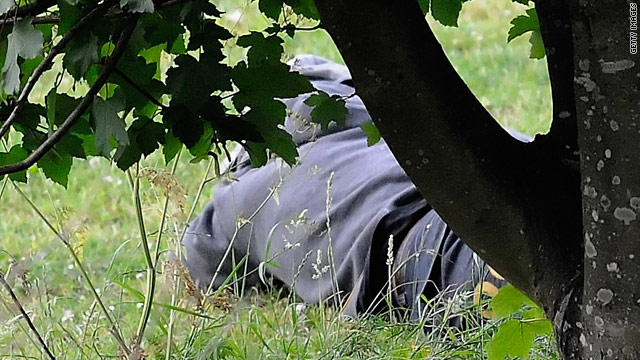 Rothbury, England (CNN) -- For residents of Rothbury lulled into thinking that a semblance of normality had returned to their lives or doubting the perilous threat under which this rural English town had been living for the past few days, Friday night brought a sudden, shocking and violent denouement.

In a standoff with armed police lasting more than six hours, fugitive gunman Raoul Moat -- suspected of shooting his former girlfriend, killing her new partner and shooting a policeman in nearby Newcastle -- held a shotgun to his head before shooting himself in the early hours of Saturday morning.

Northumbria Police said that no shots had been fired by police and that none of the officers involved had been wounded. Moat, 37, was taken to hospital for treatment but was pronounced dead at 2.20 a.m. on Saturday morning.

Since the town became the focus of the manhunt almost a week ago, many had convinced themselves, or chosen to believe, that Moat had long fled into the rugged terrain of the surrounding countryside.

Instead, when police finally got their man, it was just a few hundred meters from the center of town, on the banks of the River Coquet as locals enjoyed the early evening sunshine or walked their dogs -- and close to where a car believed to have been used by Moat was found several days earlier.

Within minutes, the town and surrounding roads had been locked down by armed police. In the rush, two police vehicles crashed into each other as they raced through the main street.

Ignoring warnings to stay indoors, locals gathered outside pubs, reports from the scene spreading word of mouth from those who had witnessed the initial confrontation and via mobile phone from those trapped in homes with a vantage point overlooking the standoff.

David Philips, a local newsagent, said his son had been walking his dog when he saw a man in a black baseball cap emerge from bushes near some stepping stones across the river. Within seconds, the man had been surrounded by armed police.

"They told him (his son) to get out of the area immediately," said Philips. "When he looked back he saw this guy on the ground surrounded by guns."

Pensioner Anne Brown said she was "frogmarched" away from the scene by police as she strolled along the riverside. "They told me they had him pinned down," she added.

Brown said it was alarming to think that Moat had been hiding out so close to the town. "He knew his way around better than the police who were looking for him. From up on the hillside he'd have had a full view of the village. He couldn't miss what was going on."

Taxi driver Roy Ritchie said his wife had been taking part in bell ringing practice in the nearby church tower when the confrontation began. "Police came up the stairs and they were banging on the door and yelling 'Stop the bells, we're trying to negotiate!" he told CNN on Saturday morning.

"I know he wasn't a nice person but nobody wanted it to end like this," Ritchie, from nearby Thropton, said on Saturday morning.

Others told reporters they had seen a line of police marksmen with guns trained on Moat. Some said he appeared to be holding a sawn off shotgun to his head. Police negotiators were also at the scene.

Adam Bell said he was "shocked" that Moat had been apprehended in Rothbury itself. Living outside the town, he said many residents of farmhouses and isolated country properties had been concerned that Moat would target outlying areas for food and supplies -- with some farmers sleeping with shotguns at their bedsides.

Earlier in the day, Rothbury residents appeared to have taken to heart police encouragement to go about their "business as usual."

But people would have been much more nervous if they had known Moat was inside the town itself, Bell said: "The feeling in the village was that we didn't think he was going to be here. There was a lot of speculation that his pals had set up a goose chase, laying a false trail for him. We didn't expect it to come to this."

In a bizarre twist, the troubled former football star Paul Gascoigne, a Newcastle native, turned up on the outskirts of Rothbury in a taxi, claiming to be a friend of Moat's and bringing him beer, food and warm clothes, according to a UK Press Association report.

In a rambling interview with local station Metro Radio, Gascoigne said. "I just want to give him some therapy and say 'come on Moatie, it's Gazza.'"

As the standoff stretched into the night, a party of wedding guests, stranded on the opposite side of the river to the reception they were due to be attending, were making the best of an unanticipated evening in the Queen's Head pub.

"We're disappointed because we want to get to the wedding but we're really relieved that he has been caught because it has all been a bit of a nightmare," said Carolynn Crawford, a local artist. "It's a really sleepy little town and we're used to a much calmer life. It will be nice to get back to normal."

Lynn Tocker, one of the organizers of next weekend's Rothbury music festival, also expressed hope that the town would recover quickly from its trauma, and said the popular regional event would offer an opportunity for residents to gather in happier circumstances.

"It's been a horrible situation but people have coped pretty well," said Tocker. "It's just a lovely friendly village and people have never seen anything like this before."