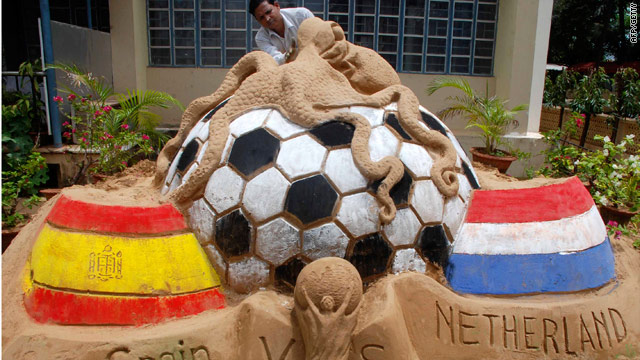 Octopus power too good to be true?
STORY HIGHLIGHTS

(CNN) -- Paul the octopus -- who correctly predicted the outcome of eight World Cup matches in a row -- is officially retiring from the prediction business, said the aquarium in Germany where he lives.

"A host of offers from around the globe will be carefully vetted in the coming days to see if there are opportunities to spread Paul's fame even further, without involving the canny cephalod directly," Sea Life aquariums said in a statement.

Oberhausen Sea Life Center in Germany, where Paul resides, is also considering establishing a school for octopods "so that Paul has the opportunity to pass on some of his skills to younger cousins before his short but memorable life reaches its natural conclusion."

Said spokesman Mark Oakley, "He has been a superstar and deserves a quiet retirement. Paul the octopus is arguably the most famous sea creature there has ever been."

Paul had a correct prediction for each of his eight tentacles, ultimately foreseeing that Spain would win Sunday's final against the Netherlands and that Germany would beat Uruguay in the playoffs.

Before that, he correctly predicted the winners in all six of the German national team's matches.

The two-year-old octopus, who was born in England, became a global celebrity during the soccer tournament.

During each prediction, two mussel-filled acrylic boxes labeled with a team's flag were lowered into his tank. Whichever box he chose conveyed the winning team.

He drew cries of despair from assembled watchers before the semifinal round, when he lingered over the box for the German flag before opting for the Spanish flag instead. Spain won the match 1-0.