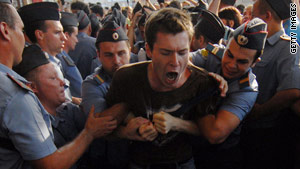 A political opposition activist was arrested Saturday at a rally in Moscow.
STORY HIGHLIGHTS
RELATED TOPICS

Most of the arrests Saturday were in Moscow and St. Petersburg, an interior ministry spokesman said.

Nemtsov told state media that he was being held at a police station in Moscow. He said he was charged with "disobeying police."

The protests were held in at least 10 territories in Russia, according to state media.

There were "no serious disturbances of public order," the ministry spokesman said.