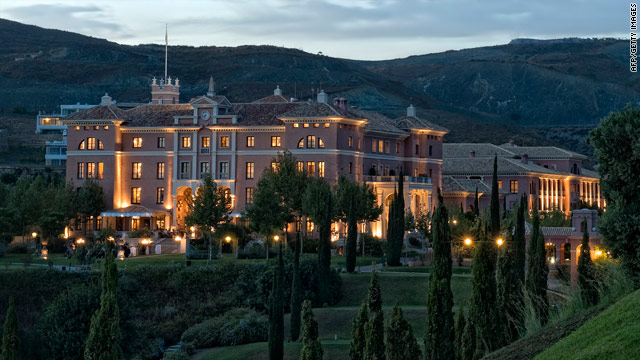 This is the Hotel Villa Padierna in Marbella, Spain. Michelle and Sasha Obama are expected to arrive here Wednesday.
STORY HIGHLIGHTS

The White House issued a brief statement Tuesday confirming only that "the first lady will travel to Spain for a private, mother-daughter trip with longtime family friends. President Obama will not be joining this trip. All activities are closed press."

While the Spanish government also was not providing details, the hotel owners and just about every local politician in the resort of Marbella, famous for its jet-set image, were discussing the visit that is making front-page news in some Spanish newspapers.

"We are really amazed about her choosing our hotel and coming down to the south of Spain, paying us such a wonderful visit at the best time of the year," said Alicia Villapadierna, co-owner of the Hotel Villa Padierna, where Obama and her entourage are staying.

An aide to Mrs. Obama and Villapadierna confirmed that the first lady was traveling with Sasha. The aide said daughter Malia, 12, is away at camp.

Security was already tight at the hotel on Tuesday. Numerous Spanish Civil Guards patrolled the various access points to the resort, and a large American flag flapped in the wind alongside a Spanish flag at the entrance.

Her husband, hotel co-owner Ricardo Arranz, said Obama apparently chose the hotel on the recommendation of friends who had visited before.

The hotel is in the hills above the resort town of Marbella, a haunt for the rich and famous, including members of the royal family of Saudi Arabia, Spain's so-called jet-set and Hollywood actors such as Sean Connery and Antonio Banderas.

Northern Europeans, especially from Britain and Germany, far outnumber the Americans who visit in August, when the beaches are packed.

The Obama group is expected to occupy 60 to 70 rooms, more than a third of the lodging at the 160-room resort, which consists of hotel rooms, suites and separate villas. Listed prices start at 300 euros, or nearly $400 per night at the resort, which uses Italian marble as a decorative theme.

The facility includes golf courses, tennis courts, a swimming pool and spa and a range of activities for children, such as sports and performing arts.

Sasha "will be surrounded by children, and I'm sure that Mrs. Obama will be able to do her life and enjoy the spa and the swimming pool," Villapadierna said.

The White House statement said Obama would visit Spain's King Juan Carlos and Queen Sofia, who typically vacation in August at their summer palace on Mallorca Island in the Mediterranean, a short flight from Marbella on the southern Costa del Sol (sun coast) of Spain.

Spanish media reported the visit with the Spanish royals could come this weekend.

Before then, many people in old town Marbella -- with its winding narrow streets and white-washed walls, and in nearby chic Puerto Banus, where large yachts are moored -- were hoping Obama would come for a visit.

At the nearby Luz jewelry store, owner Kai Baumann said, "I think porcelain is very nice. I think she likes this style of things. And I would make a photo, of course. I would be very happy. She's a very nice lady."

But on this private vacation under tight security, it's not likely many local people will get a chance to see Michelle Obama up close.