Bodies found on lake's shore may be missing Bosnian Muslims 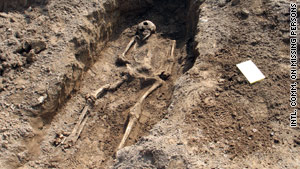 Bodies found along Lake Perucac are believed to be from the three-year Bosnian war that began in 1992.

(CNN) -- As many as 50 bodies discovered on the shores of a lake at the border of Serbia and Bosnia-Herzegovina may be those of Bosnian Muslims who disappeared from a nearby village in the 1990s, officials said.

The International Commission on Missing Persons and the Missing Persons Institute of Bosnia-Herzegovina discovered the bodies that are believed to be from the three-year Bosnian war that began in 1992, a spokesman for investigators said Thursday.

They were discovered along Lake Perucac, an artificial reservoir that is connected to a hydroelectric power plant. Lake water levels have been dropping as the result of recent maintenance, commission spokesman Jasmin Agovic said, and the dropping water revealed sites that have yielded bodies.

The bodies may be those of victims of "ethnic cleansing" that occurred during the war, according to investigators.

Investigators are working to identify the bodies and believe that they may be those of Bosnian Muslims. During the conflict, about 1,000 Muslims disappeared from the village of Visegrad, which was occupied by Serbs in 1992.

"We cannot say exactly say how many bodies were found until we conduct a DNA analysis and until the DNA profiles of victims are matched, because during the excavations, the bones and tissue are mixed and we cannot determine the identities of the bodies," Agovic said.