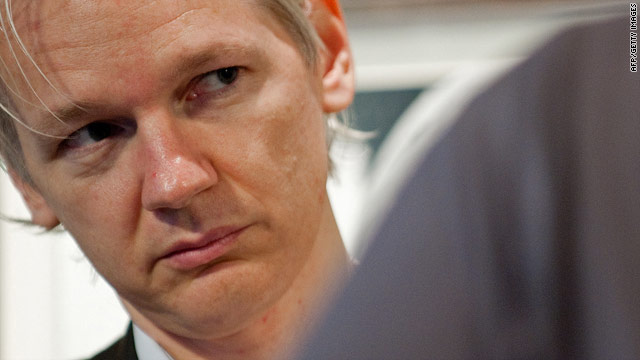 Stockholm, Sweden (CNN) -- Swedish authorities say they have revoked an arrest warrant that had alleged rape against Julian Assange, the founder and editor of the whistle-blowing website WikiLeaks, less than a day after issuing it.

Assange is "no longer wanted" and "is not suspected of rape," Chief Prosecutor Eva Finne said in a statement posted on the agency's official website Saturday. He is also no longer arrested in absentia, the statement said.

The arrest warrant filed Friday had also mentioned a molestation charge, but molestation -- which is not limited to child victims in Sweden -- is not a crime punishable behind bars in Sweden.

Karin Rosander, a spokeswoman for the prosecutor's office, told CNN affiliate TV4 that Assange is still being investigated for molestation. Earlier, Rosander told CNN that Assange was arrested in absentia Friday night, and faced charges in relation to two separate instances, but she did not have more detail about when the alleged crimes occurred or the identities of the alleged victims.

Video: Wikileaks founder accused of rape
The charges are without basis and their issue at this moment is deeply disturbing.
--Julian Assange, WikiLeaks on Twitter
RELATED TOPICS

Assange denied the allegations in a posting Saturday on the WikiLeaks Twitter page, saying, "The charges are without basis and their issue at this moment is deeply disturbing."

Assange was in Sweden last weekend, but it wasn't clear whether he was still in the country and, thus, couldn't be reached for comment.

Rosander told TV4 that the decision to make the arrest was made by an "on-call prosecutor," and that the arrest was revoked Saturday by the chief prosecutor. Rosander said such differences in prosecutorial judgment are common in Sweden.

She also said she does not believe that Assange had contacted police yet.

Swedish media, citing unnamed sources, reported that two women, ages 20 and 30, took the allegations against Assange to police Friday, leading to the warrant issued by the first prosecutor. The AftonBladet, a respected Swedish daily, said the 30-year-old woman told the newspaper that the younger woman approached her with a story similar to hers -- that she had consensual sex with Assange but that the situation had turned abusive.

Rosander would not confirm the reports.

An elusive figure, Assange reportedly lives part-time in Sweden. He told the Swedish newspaper Svenska Dagbladet this week that he chose Sweden to host several servers for WikiLeaks because of the country's privacy laws.

He also told the paper, in an interview published Monday, that he had been in Sweden because he wanted a safe place to go after the high-profile leak of U.S. documents related to the war in Afghanistan.

A statement was posted by the "WikiLeaks team" on the website earlier Saturday, saying, "We are deeply concerned about the seriousness of these allegations. We the people behind WikiLeaks think highly of Julian and and he has our full support."

WikiLeaks will continue its work as "Julian is focusing on his defenses and clearing his name," the statement said.

WikiLeaks has sparked major controversy by posting some 76,000 pages of the Afghan documents online last month, in what was called the biggest leak since the Pentagon Papers about the Vietnam War.

As WikiLeaks has grown and published increasingly high-profile items, Assange has found himself the target of what he says are many legal attacks -- though not necessarily of the type he now faces in Sweden.

"In my role as Wikileaks editor, I've been involved in fighting off many legal attacks," Assange said in an e-mail to the BBC earlier this year. "To do that, and keep our sources safe, we have had to spread assets, encrypt everything, and move telecommunications and people around the world to activate protective laws in different national jurisdictions.

"We've become good at it, and never lost a case, or a source, but we can't expect everyone to go through the extraordinary efforts that we do."

In a news conference following the release of the Afghan documents, Assange said the site has 800 part-time volunteers and a loose network of 70,000 "supporters."

CNN's Bharati Naik in London, England, contributed to this report.