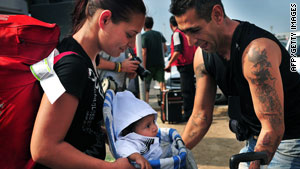 Romanian Roma from Lyon, France, are pictured arriving at Aurel Vlaicu airport in Bucharest on Thursday.

(CNN) -- Two chartered planes carrying almost 300 Romanian nationals left France on Thursday in compliance with the French government's program to expel Roma without valid identity papers, according to the French Ministry of Immigration.

One flight, carrying 113 Roma, departed from Lyon; the other, carrying 157, left from Paris.

The passengers aboard both planes were repatriated voluntarily, accepting financial compensation of 300 euros ($381) per adult and 100 euros ($127) per child.

Almost 8,300 Romanian and Bulgarian nationals have now been expelled from France since the beginning of the year. Close to 10,000 were expelled in 2009.

French officials have said the deportations are part of a broader crackdown on illegal immigration. Additional chartered flights are scheduled for September 14 and 30.

Over the past month, the French government has dismantled 51 Roma camps that it called illegal.

"Over there, they were giving us food, money ... salary. Life is much better out there -- happier," Mariana Serban, a mother of four, recently told Romania's Realitatea TV.

She told the reporter she did not work in France, and smiled when the reporter pointed out France would not give them any more money.

"That's what they say now, but they will give us money again," Serban said.

Serban's oldest son, Alexandru, 12, spoke in French as he told the TV station, "It's much better in France. I'm here [in Romania] now for a visit, and I will leave again. I'm staying here for two days only."

The comments by the returning Roma may dash any French hopes that they will resume their former lives in Romania.

"They will go and meet their parents and other relatives, and after that they will return to France, I'm telling you," Adrian Edu, an expert on Roma issues with the Bucharest City Hall, told PRO TV.

Roma are a group of people who live mainly in southern and eastern Europe, often in poverty. Commonly referred to as Gypsies, they tend to live in camps, caravans, or informal settlements and have been the target of persecution throughout history.

Romanian President Traian Basescu said in a statement last week that his country would try to find a solution to the French situation.

"We understand the problems Roma camps create around French cities, and we will work with France to find suitable solutions," he said.

Roma from Romania and Bulgaria are allowed free passage into France if they are European Union citizens. After that, however, they must find work, start studies, or find some other way of becoming established in France or risk deportation.

Two Romanian secretaries of state plan to be in Paris on August 30 to discuss the integration of Roma populations, the French Foreign Ministry said. It said Paris favors the social integration of the Roma in Romania.