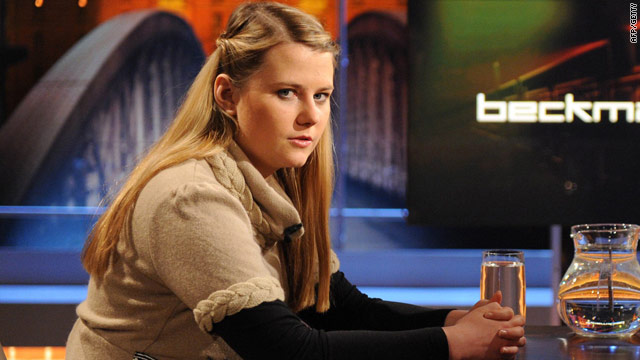 Natascha Kampusch pictured in a German TV studio during the recording of Beckmann, on September 4, 2010.
STORY HIGHLIGHTS

London, England (CNN) -- Natascha Kampusch, the Austrian woman who was held prisoner for eight years in a basement, has revealed new details of her ordeal in an autobiography.

In the book, entitled "3,096 Days," Kampusch, who was abducted aged 10 in 1998 while walking to school, describes the relationship she fostered with her abductor Wolfgang Priklopil in order to ensure her survival and the bizarre routines she endured at his hands.

The serialization in the UK's Daily Mail newspaper details how Kampusch was locked inside a "hermetically sealed" concrete jail, beaten up to 200 times a week until she heard her own spine "snap" and was manacled to Priklopil while they slept together in his bed.

Kampusch escaped in August 2006 aged 18 and now lives in Vienna, Austria. Priklopil, 44, an engineer, committed suicide shortly after her escape.

Penguin, the British publishers of the English version, released a statement on behalf of Kampusch: "I now feel strong enough to tell the full story of my abduction for the first time."

Describing her captor, Kampusch writes: "At 35, he had soft features and neatly parted brown hair. It was only when you observed him for a longer period that you noticed the traces of madness lurking beneath his conservative exterior."

During her captivity she was held in a subterranean bunker which was initially equipped with just a bed, toilet and sink.

She also recalls her first night in captivity. "I asked him to put me to bed properly and tell me a goodnight story," she writes. "I even asked him for a goodnight kiss. Anything to preserve the illusion of normality. And he played along."

Kampusch, now 22, goes on to describe how Priklopil would threaten her, saying: "If you're not good, then I'll have to tie you up."

"He told me my parents had refused to pay a ransom, 'Your parents don't love you at all... They don't want you back... They're happy to be rid of you.'"

She also describes the psychological games Priklopil played with her. "In all his visits he talked about the people who'd supposedly 'ordered" my kidnapping and would come and take pictures of me 'and do other things as well'. I lived in constant fear that at any moment a horde of evil men would come into my dungeon and attack me.

"And of course my fear of the 'true kidnappers' made the man who had abducted me seem caring and friendly by contrast."

Some psychologists have described this relationship as Stockholm Syndrome, a psychological condition when the victim of an abduction identifies with the kidnapper and becomes attached to him or her.

Kampusch recounts how Priklopil ordered her to call him "Maestro" or "My Lord" and to kneel in front of him. He also forced her to shave off her hair and work half-naked as a domestic slave, driving her to repeated suicide attempts.

Since her release Kampusch has become a media personality, appearing on television shows around the world. She worked for a while as a television presenter in Austria in 2007.

A spokesman for Penguin told CNN: "This is her first autobiography and the most detailed account of her life during captivity."

The English version of the autobiography is published on September 13 in the UK.