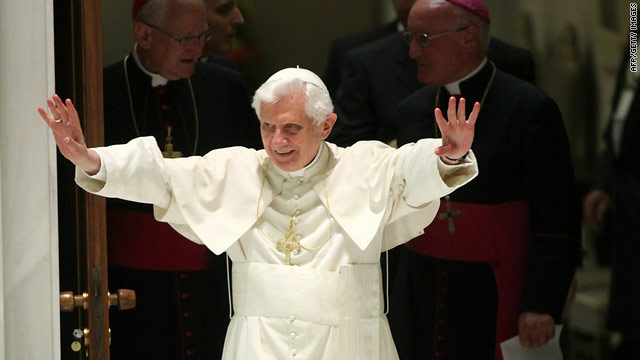 On the eve of his visit to the United Kingdom, Pope Benedict XVI attends his weekly audience Wednesday in Vatican City.
STORY HIGHLIGHTS

London, England (CNN) -- As the United Kingdom braces to receive one of the best-known and most controversial figures on the planet, Pope Benedict XVI, a question hangs over the state visit: Why is he coming?

The leader of the world's 1 billion-plus Catholics does not particularly like to travel, Benedict biographer David Gibson says.

Since a high-profile visit to Israel and the Palestinian territories nearly a year-and-a-half ago, he's gone only to a handful of small countries not far from Rome -- racking up nothing like the number of air miles logged by his predecessor, Pope John Paul II.

And the United Kingdom is not a Catholic country. On the contrary, Britain's break from Rome in the 16th century echoes, if faintly, to the present day, with laws on the books forbidding the heir to the British throne from marrying a Catholic.

In fact, the country is one of the less religious ones in Europe, home to vociferous critics of religion, like Richard Dawkins, and those who find belief in a higher power simply unnecessary, like Stephen Hawking.

Public opinion on the eve of his visit ranges from indifference to downright hostility. There will be protests from critics who consider him a protector of pedophiles and from liberal Catholics who resent his staunch defense of orthodox doctrine.

And all this will play out in in front of the British media -- one of the world's most aggressive.

So why, aged 83 and happier at home, is the professorial vicar of Christ on earth stepping into the lion's den? It may be the very factors that seem to argue against his coming that impelled him to come, according to two experts.

This pope relishes a challenge, said John Allen, CNN's senior Vatican analyst. His "No. 1 priority is to combat secularism, and in some ways the United Kingdom is the dictionary definition of a post-religious society," Allen said. "He just created a whole new department in the Vatican to reawaken the faith in the West, and this trip is a chance to elaborate a strategy."

Benedict will make what the Vatican is billing as one of the major speeches of his papacy in London on Friday, making the case for religion over a purely secular society. Benedict biographer Gibson said the pope, formerly Cardinal Joseph Ratzinger, has a history of rolling up his sleeves and taking on his intellectual opponents.

"He enjoyed it when he was cardinal -- going to various places and venues and presenting controversial views in a polemical tone," said Gibson, the author of "The Rule of Benedict." "Britain is such a redoubt of secularism, he can [try to] slay the dragon in its lair. He can't resist, really," Gibson said.

A close confidant of Benedict made headlines shortly before the visit by likening London's Heathrow Airport to a Third World country, but Cardinal Walter Kasper also very pointedly criticized what many Christians see as enforced secularism in the United Kingdom.

While Benedict is picking a fight with secularism, he also needs to mend bridges with fellow Christians, both experts said. The Catholic Church moved surprisingly forcefully last year to make it easier for disaffected members of the Church of England to switch allegiance to Rome, sparking consternation in a deeply divided Anglican world.

Benedict "cares about relations with the Anglicans, seeing it as the model for relations with all the other Christian churches in the West," CNN's Allen said. Creating "new structures to welcome Anglican converts into the Catholic Church" is seen by many Anglicans "as poaching, so he needs this trip to mend fences."

Allen compared the trip to Britain to one Benedict made to Turkey in 2006 after the pope made controversial comments about Islam. On that trip, the pope appeared with a top Muslim religious leader at Istanbul's famous Blue Mosque. This week he will pray with the head of the Church of England, Archbishop of Canterbury Rowan Williams, in London.

Gibson also sees an element of outreach to the Anglican archbishop in the pope's visit -- but also to his flock.

"He doesn't want to have bad relations with Rowan Williams, but he also makes very clear that he wants closer relations with traditional Christians," Gibson said. "He is looking for allies."

Indeed, a leading voice for conservative members of the Church of England, Canon Chris Sugden, said, "Many orthodox Anglicans in England would feel that they share more in common with the pope than with the presiding bishop of the Episcopal church [Rowan Williams]."

That doesn't mean Anglicans see eye-to-eye with the pope on a number of important theological issues, he said, but added, "We welcome the pope's visit because it raises many of the critical challenges to the current elite secularism that is being imposed on us," he said.

And if his religious message proves unpopular in Britain, particularly against the backdrop of the sex abuse scandals enveloping the Catholic Church, Benedict really doesn't mind, Gibson said. "He sees criticism almost as a form of persecution that reinforces the importance and the truth of his message," he said.

"He doesn't care about popularity and in fact revels a bit in drawing protests -- that whole dynamic of being despised proving your faith."

Coming under sufficiently intense criticism could even rebound in Benedict's favor, Gibson said. "British tabloids can be so over-the-top that they can prove his point," he said. "He could become a sympathetic figure."

Visiting the United States three years ago boosted Benedict's popularity there, the Pew Forum on Religion & Public Life found. This visit could have a similar effect in the United Kingdom, Allen said.

"My prediction: He'll do better than people expect," he said. "He usually does on the foreign trips."