What the UK papers say about the pope 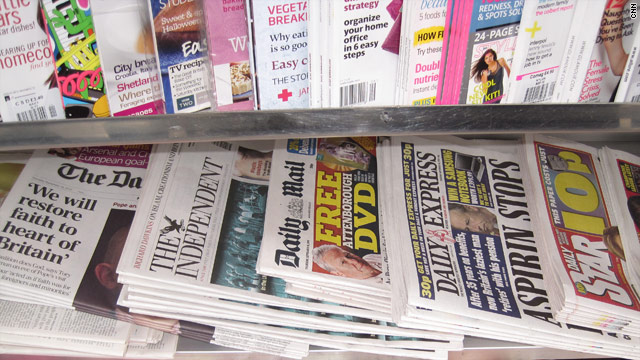 Many commentators expressed support for the pope's visit to Britain in spite of controversy surrounding the Church.
STORY HIGHLIGHTS

London, England (CNN) -- Controversial comments criticizing the state of modern Britain have provoked a backlash as Pope Benedict XVI arrived in the country for its first ever papal state visit.

In an interview with a German magazine, one of the pope's closest advisers claimed that when arriving at London's Heathrow Airport, "you think at times you have landed in a Third World country." Cardinal Walter Kasper, 77, also criticized a "new and aggressive atheism" that he claimed was prevalent in Britain where he said Christians were discriminated against.

The quotes from the cardinal, who has pulled out of the papal visit, provoked a robust response from the British press, with the tabloid newspaper The Sun branding Kasper the "Pope's dope." Other commentators accused the cardinal of racism.

In an attempt to diffuse the row, the Vatican issued a statement saying that the cardinal had not intended "any kind of slight" and that his "Third World" remark referred to the UK's multicultural society. They added that he had simply pulled out due to illness.

Benedict XVI was met by the Queen at the Palace of Holyroodhouse in Edinburgh Thursday with the full honors accorded a world leader.

The reason for the visit is the beatification of Henry Newman, an Anglican priest who converted to Catholicism in the 19th century. However, some observers say the visit is an attempt by Pope Benedict to confront rising atheism in a country seen as one of the most atheistic in the world.

The Guardian newspaper said Cardinal Kasper's comments were "stupefyingly tactless," especially his claims that the Church of England had created difficulties for itself by allowing married priests and women priests.

The paper claimed the remarks, made in an interview with the magazine Focus, revealed a move by the Vatican "to reestablish the Catholic church as a defender against Islam and liberalism."

Other newspapers backed the pope, saying he was the victim of a left-wing hate campaign. The Daily Mail called the protesters "pompous." "To listen to these exhibitionists, you might think that the 265th leader of the world's oldest and largest Christian church was an international criminal," the paper wrote in an editorial.

The paper defended Benedict XVI "as a deeply thoughtful theologian, whose chief anxiety is the spiritual vacuum at the heart of a modern society bent on instant gratification."

The Daily Telegraph also came to the Pope's aid, writing that with the world's attention focused on Britain it was important for the country's reputation "that their impression of British hospitality in the best sense should be positive."

Meanwhile the Catholic Herald said it expected that the controversy surrounding the event would "be swept away by the visit itself."

During his trip the Holy Father will make a speech at London's historic Westminster Hall Friday where he is expected to talk about the positive contribution to society of the Catholic faith. He will also lead prayers with the head of the Church of England, Archbishop of Canterbury Rowan Williams.

Benedict's reign in the Vatican has been mired in controversy, much of it surrounding allegations of sex abuse within the Catholic Church. He has also been criticized for his conservative views on abortion and gay rights.

The Vatican is believed to be arranging for the Pope to hold private meetings with people who suffered sexual abuse at the hands of clerics during his trip.

At a press conference in London timed to coincide with the visit, former victims of abuse within the British Catholic Church called on the Pontiff to hand over all information on abusive clergy, saying that they wanted justice and accountability.

Even so, many commentators cautioned that the controversies should not be allowed to overshadow the four-day visit, which was a time of celebration for Britain's six million Catholics.

The tabloid Daily Mirror said in an editorial: "It is the democratic right of every British man and woman to speak his or her mind and protest if they wish but we would urge any demonstrators to be dignified.

"The Pope is a religious figure and a head of state and we'd be furious if the Queen went to Italy and was abused or her tour disrupted."