Cardinal Newman: The man behind the pope's visit 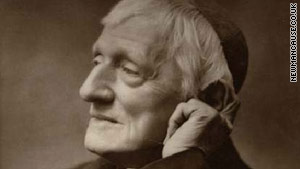 Cardinal Newman's famous work, the Apologia, is considered by critics as one of the great autobiographies of its time.
STORY HIGHLIGHTS

The Mass at Birmingham's Cofton Park is the centerpiece of his UK visit, yet the majority of British people know little about the cardinal or the significant role he played in the spread of Catholicism.

Who is Cardinal Newman and why is he being beatified?
Born John Henry Newman in 1801, he was an English priest who converted to Catholicism and was eventually made a cardinal by Rome.

He headed a movement of theologians to bring the Anglican Church back to its papal roots and was a famous author in Victorian Britain. Pope Benedict XVI is thought to be a long-time fan of his writings.

This is not the reason for his beatification, however. The Vatican's decision follows a long investigation into a supposed miracle that a deacon in Boston claimed to have experienced after offering a prayer to Newman.

Video: Catholicism around the world

Why is Pope Benedict such a fan?
Cardinal Newman is seen by Catholics as a great spiritual thinker and reformer. He led a movement of Anglicans, known as the Oxford Movement, whose aim was to return the Church of England to its Catholic roots.

He converted at the age of 44, and was made a cardinal by Pope Leo XIII. His most well-known work, the Apologia, was a memoir of his spiritual journey and is considered by critics as one of the great autobiographies of its time. His writings won him popularity and critical success -- the Irish writer James Joyce called him "the greatest of English prose writers."

Benedict meanwhile delivered a paper on Newman 25 years ago comparing him with Socrates and Thomas More, an English statesman who was executed by Henry VIII for refusing to recognize the king's legitimacy as the head of the church.

What does it mean if someone is beatified?
A person is beatified -- or made blessed -- only after it has been proved that a miracle can be attributed to them following a petition by someone in need.

What happened in the case of Cardinal Newman?
The petition came from a deacon in Boston who believes that the dead priest cured him from crippling back pain.

Doctors told Jack Sullivan in 2000 he would have to quit his religious studies to undergo surgery. He was watching a television show about Cardinal Newman and at the end there was an appeal asking anyone who had prayed to the cardinal and experienced a miracle to get in touch.

Sullivan offered a prayer asking Newman to help him walk again so that he could return to his studies. The next day he says the pain had gone. After investigating the deacon's petition over several years, the Vatican decided it was valid.

How does the Vatican judge who should be a saint?
A person who is beatified is given the title "Blessed." It is one of the steps in the canonization process by which someone is eventually recognized as a saint.

In order for this to happen, a second miracle must be recorded and verified. There is also a long investigation headed by the Vatican's Congregation for the Causes of Saints. Throughout, a Vatican official called the "general promoter of the faith," or devil's advocate, raises objections and doubts which must be resolved by the other priests.

As part of the canonization, the Church sometimes even digs up the remains of the candidate. For example, the body of Pope John XXIII, who died in 1963, was exhumed when he was beatified. According to the Vatican, the body was found to be unusually well preserved.