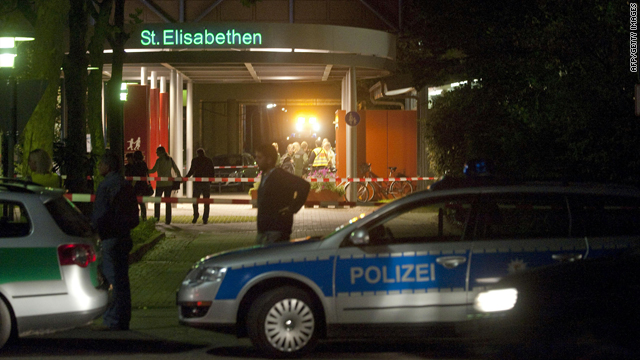 Police and fire brigade vehicles park in front of the St. Elisabethen hospital in Loerrach, Germany, on Sunday.
STORY HIGHLIGHTS

Berlin, Germany (CNN) -- Authorities in southwest Germany were looking for a motive Monday in an apartment building fire and a hospital shooting that, together, killed four people and are believed to be linked.

Two bodies -- one of a man and another of a 5-year-old boy -- were found inside a burning building in the city of Loerrach, police said Sunday evening.

As authorities responded to the fire, they saw a woman -- armed with weapons -- run from the building toward a hospital.

On the way, the woman -- later identified as a 41-year-old lawyer -- shot two passers-by, severely wounding them, police said.

At the St. Elisabethen hospital, the woman stabbed and shot a male nurse, killing him before police fatally shot her, authorities said.

A police officer was also seriously injured in the attack at the hospital.

Police later said the bodies in the apartment belonged to the woman's ex-husband and their son. Residents heard gunshots in the building shortly before it went up in flames, authorities said.