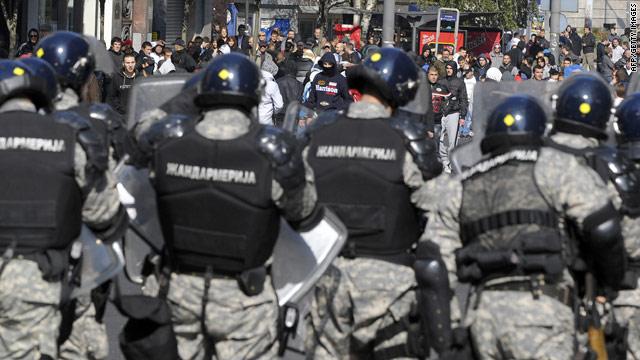 About 40 police officers were injured, and about 60 people were arrested, the ministry's Suzana Vasiljevic told CNN. None of the marchers were injured.

"It is very important that the event, which might be disagreeable to most of Serbia's citizens, goes by without incidents," Dacic said in Belgrade.

A gay pride march in 2001 -- thought to be the country's first -- was attacked, resulting in some injuries.

Last year's march was canceled due to security concerns after a wave of anti-gay graffiti appeared before the event, news reports at the time said.

About 1,000 people participated in this year's march, guarded by close to 5,000 police officers, Vasiljevic said.

A number of streets were closed for the event, and international diplomats were scheduled to observe it, according to the interior ministry.