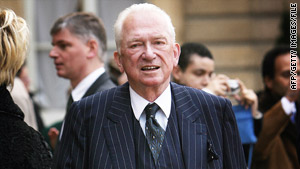 Jean-Paul Guerlain issued an apology that was read by a France 2 anchor after the broadcast of his interview.
STORY HIGHLIGHTS

Guerlain -- who is no longer connected with the perfume company that bears his name -- made the remarks during an interview with France 2 on Friday about his career and the making of Samsara, one of his famous perfumes he created to impress a woman.

"One day I told her -- and I still called her Madame -- 'What would seduce you if one was to make a perfume for you?' and she told me, 'I love jasmine, rose and sandalwood,'" Guerlain recalled.

Guerlain issued an apology following the interview's broadcast, which a France 2 anchor read during the network's evening newscast.

"My words do not reflect in any way my profound thoughts but are due to an inopportune misspeaking which I vividly regret," the apology read.

SOS-Racisme said it is not satisfied with Guerlain's apology and will bring action against him. Guerlain could be issued a fine if the complaint goes before a magistrate.

Louis-Georges Tin, a spokesman for the Council Representative of Black Associations, told French radio RTL that his group also will join in the complaint.

"Until now we thought that Mr. Guerlain was the ambassador of grace, and he made comments particularly disgraceful, even a bit foul," Tin said.

"That's why we are shocked. These comments are racist, of course, which harken back to the colonial period and it seems unacceptable. For now, we are planning to file a complaint," he said.

France's finance minister, Christine Laguarde, also weighed in on the comments, telling RTL on Saturday, "It's pathetic. I simply hope this is just senile and grotesque, that the apologies will really be sincere and gracious, but this is truly pathetic."