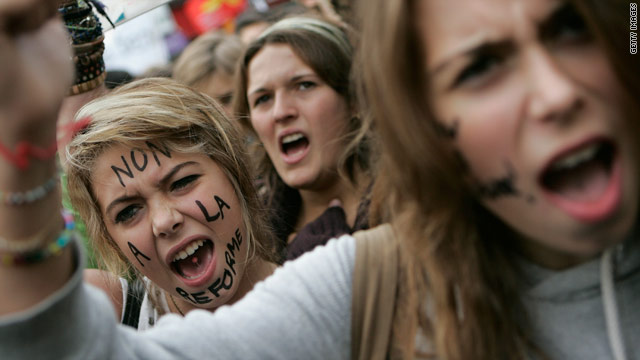 French students, one with "No to the reform" written on her face, demonstrate Saturday in Paris.
STORY HIGHLIGHTS

Paris, France (CNN) -- France entered a fifth day of nationwide strikes Saturday as tens of thousands of protesters took to the streets, rallying against a government proposal to raise the national retirement age to 62.

France's Interior Ministry said some 825,000 protesters turned out nationwide, while labor unions -- who oppose upping the retirement age -- said 3.5 million protesters attended the more than 200 demonstrations across the country Saturday.

Emotions ran high in France as the pension debacle continued to pit the government against French unions. Analysts say pension reform will likely be a defining moment in Sarkozy's presidency.

Despite repeated national strikes over the controversial proposal, France's National Assembly on Wednesday approved Sarkozy's pension reform bill which would raise the national retirement age from 60 to 62.The proposal passed 329 to 233, but still must pass the Senate to become law.

The Senate is expected to vote October 31.

In the meantime, throngs lined up on Saturday outside gas stations amid fears of fuel shortages as 10 of 12 oil refineries participated in the strikes.

Only two of the refineries in France were in full production Saturday, according to the Union of French Petroleum Industries.

But French Finance Minister Christine Laguarde told RTL radio in an interview Saturday that the country has several weeks worth of fuel stocks, saying "the government confirms there is no shortage."

Yves Le Goff, a spokesman for the French Oil Industry Association, on Friday also said there is currently no rupture in the fuel supply, but that did not stop consumers from lining up at gas stations across the country to stock up on fuel, just in case.

The work stoppage at the refineries had a direct effect on the two main Paris airports, Orly and Charles de Gaulle. Both are supplied by a pipeline that comes directly from refineries that were shut down Friday, according to Trapil, the company that owns the line.

But a French transport ministry spokesman told CNN late Saturday that the pipeline supplying fuel to the airports has been reopened and is operating normally.

While more than a dozen unions and federations have called for workers to strike, not everyone walked off the job. Officials at the Ministry of Education, for example, said only 30 percent of its sector was affected.

Workers from both the public and private sectors are on strike, including those in transportation, education, justice, hospitals, media and banking.

The strikes have also led to a reduction in train services throughout France.

"It's three years this has been going on ... three years of stupidity on stupidity ... arrogance on arrogance .. even verbal violence on his part against some categories of French citizens," said Delanoe.

But Sarkozy insists the changes are needed because rising life expectancy increases the financial burden on the pension system.