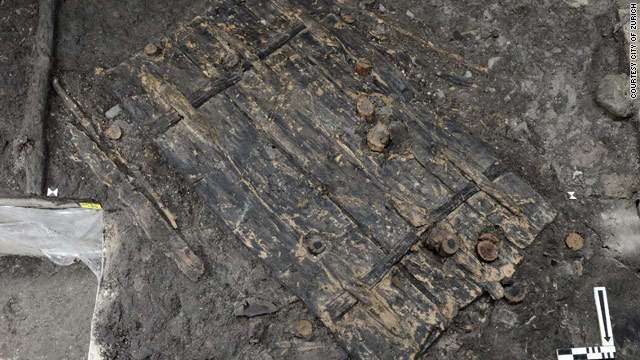 At more than 5,000 years old, the door is one of the oldest ever found in Europe.
STORY HIGHLIGHTS
RELATED TOPICS

(CNN) -- A Stone Age door in "exceptional condition" has been found in the heart of the Swiss city of Zurich, a city official said Friday.

The artifact -- thought to be more than 5,000 years old -- was recovered during an archaeological excavation before the construction of a parking lot for the Zurich Opera.

"It is one of the oldest doors ever found in Europe," said Niels Bleicher, Zurich Monument Preservation Department's chief scientist.

He said the door remains on the ground and workers will try to pull it up next week. It will then be stabilized, preserved, and probably put into a museum, he said.

Bleicher said the door, about 1.5 meters high, hails from the Horgen archaeological culture and dates to the late 4th millennium B.C.

"It is made from poplar wood. The technique and design are solid," he said.

"The door is in an exceptional condition. Even the wooden handles are preserved."