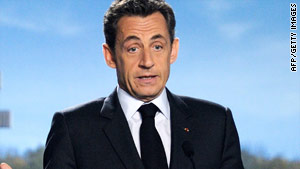 Nicolas Sarkozy's government has insisted the adjustments are necessary in order to save money.
STORY HIGHLIGHTS
RELATED TOPICS

The bill has been a contentious issue in France, sparking thousands of workers and students to spill into the streets to protest parts of the measure, especially a provision that raises the retirement age.

"I have heard the concerns that were expressed during the debates and I am fully aware that this is a difficult reform. However, I always felt that my duty, and the government's duty, was to carry it out. With this law, our pension plan by equal division is saved," Sarkozy said in a statement.

"The French are now ensured that they can count on their retirement and pension levels will be maintained," the president added.

Sarkozy has been one of the measure's strongest backers. It raises the country's minimum retirement age from 60 to 62, as well as making other changes in pension rules.

Sarkozy's government has insisted the adjustments are necessary in order to save money. It has set for itself the ambitious goal of cutting the French deficit from 8 percent to 6 percent of the gross domestic product by next year.

Still, the bill has been hugely unpopular with the French public.

French Interior ministry officials said about 375,000 people across the country participated in demonstrations against the bill Saturday, and about 560,000 people turned out for protests October 28.