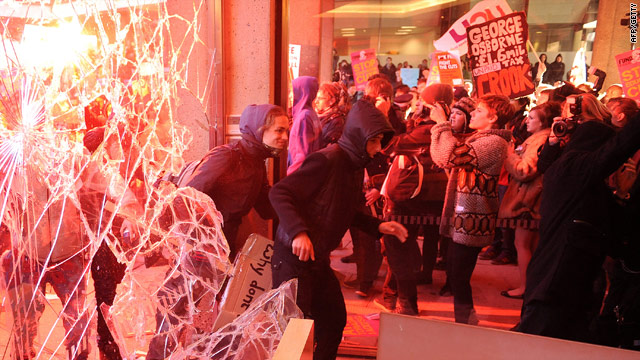 London, England (CNN) -- A group of demonstrators broke into the headquarters of Britain's governing Conservative Party in London Wednesday, spray-painting anarchy symbols and setting off flares before being forced out of the building.

They broke large windows, painted obscenities on the walls, and later climbed onto the roof and hurled objects down.

The violence came during a largely peaceful protest by students against government plans to allow universities to increase tuition fees. The National Union of Students said 50,000 demonstrators were on the streets.

Extra police officers were sent to deal with the violence, they said.

Eight people suffered minor injuries in the protests and were taken to hospitals, police said. The injured included both police and protesters.

The president of the National Union of Students, Aaron Porter, called the scenes of violence "despicable" and blamed "rogue protesters" for undermining an otherwise peaceful demonstration.

"We are taking to the streets in unprecedented numbers to tell politicians that enough is enough," Porter said in a statement before the demonstration.

"We will not tolerate the previous generation passing on its debts to the next, nor will we pick up the bill to access a college and university education that was funded for them," he said.

The government wants to raise tuition fees and scrap some subsidies for university students as it tries to cut a massive budget deficit.

Defenders of the plan say that universities will not have to charge the maximum they're allowed to, but an education policy expert told CNN they will.

"What will happen is that the number of (university) places will be held down -- the government will continue to limit the number of students the universities may recruit because the government subsidizes them through a loan," said Bahram Bekhradnia, director of the Higher Education Policy Institute.

"Students will want to get into university because the best jobs go to those with university degrees," he continued.

"It seems economically sensible for the universities to charge as much as they can. It may not happen immediately but in the medium term, most universities will charge the maximum," he concluded, adding that's what happened when the maximum was last increased four years ago.

CNN's Antonia Mortensen and Joyce Joseph contributed to this report.