Pope calls for Pakistani Christian woman to be freed 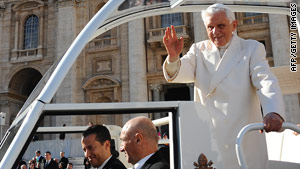 He also spoke out about the "difficult situation of Christians in Pakistan," who suffer "discrimination and violence," at the end of his weekly general audience Wednesday.

Bibi was sentenced to death for insulting the Muslim prophet Mohammed and for calling the Quran "fake" -- a capital crime in Pakistan.

She has filed an appeal and asked for bail, the chief prosecutor of Punjab province told CNN.

Pakistan has never executed someone convicted of blasphemy, he said, but he refused to predict the outcome of Bibi's appeal.

She was working in a field with several Muslim women in a village southwest of Lahore when she made the remarks, according to police records.

She also made comments about one of Mohammed's wives and about his health in his final days, the police complaint against her said.

She said that "the Quran is fake and your prophet remained in bed for one month before his death because he had worms in his ears and mouth. He married Khadija just for money and after looting her kicked her out of the house," local police official Muhammad Ilyas told CNN.

The initial complaint against Bibi was filed on June 14, 2009, by a Muslim cleric, Ilyas said.

Police say the Muslim women reported the incident to Qari Muhammad Salim, who later filed the police report. The cleric claims Bibi confessed to him and apologized.

Muhammad Iqbal, a senior police official in the district of Nankana Sahib, said she also was fined the equivalent of $1,100.

Police say Bibi was charged with breaking section 295-C of Pakistan's penal code, which says: "Whoever ... defiles the sacred name of the Holy Prophet Muhammad (peace be upon him) shall be punished with death, or imprisonment for life, and shall also be liable to fine."

Death sentences in these types of cases are almost always overturned by higher courts on appeal, he said. Capital punishment is carried out by hanging in Pakistan.