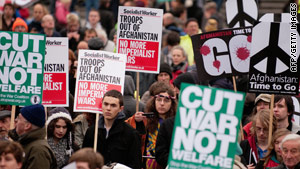 Demonstrators in London came out in force Saturday in a show of support for the antiwar movement.
STORY HIGHLIGHTS
RELATED TOPICS

London, England (CNN) -- A large protest was happening Saturday in London against the war in Afghanistan, with organizers saying thousands from around the country would take part.

Demonstrators were marching from Speakers Corner in Hyde Park to Trafalgar Square, where there were planned speeches from Labour politician Tony Benn, former London Mayor Ken Livingstone, two members of Parliament and others.

Former British soldier Joe Glenton was one of those marching. He served in Afghanistan and was jailed when he refused to go back, and Friday, he handed back the veterans badge he received when he left the armed forces.

"There's a real upswell of support, and there's something coming," he told CNN about the anti-war sentiment he sees in Britain.

Also at the protest was Mandy Sylvester, who said her son has been in Afghanistan for four weeks with the British Paratrooper Regiment.

As protesters behind her held signs reading, "Cut war not welfare," Sylvester told CNN the war costs too much and is no longer justified.

The Stop the War Coalition was organizing the demonstration along with the Campaign for Nuclear Disarmament (CND) and the British Muslim Initiative.

Afghanistan is at the top of the agenda for Saturday's meeting of NATO leaders in Lisbon, Portugal, where they agreed with the Afghan government to leave international forces there for many years after a planned military transition in 2014.

Protesters called Saturday for the troops to come home, with one saying they are only "exacerbating the situation" by being in Afghanistan.

"Any development that has happened hasn't been for the Afghan people," said protester Chaz Singh. "It's only been for the businesses that have come from America, the U.K., and Europe."