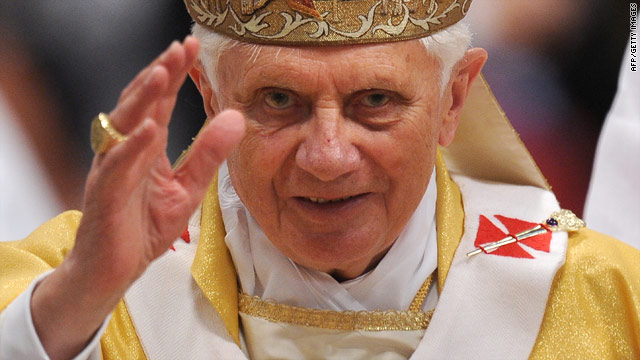 Pope: Condoms to prevent AIDS may be OK
STORY HIGHLIGHTS

"This move recognizes that responsible sexual behavior and the use of condoms have important roles in HIV prevention," UNAIDS executive director Michel Sidibe said in a statement.

"This will help accelerate the HIV prevention revolution," he said Saturday.

There could be single cases that can be justified, for instance when a prostitute uses a condom ...
--Pope Benedict XVI
RELATED TOPICS

"You can't resolve it with the distribution of condoms," the pope told reporters in March 2009. "On the contrary, it increases the problem."

But he outlined a possible exception in remarks published Saturday.

"There could be single cases that can be justified, for instance when a prostitute uses a condom, and this can be a first step towards a moralization, a first assumption of responsibility, to develop again the awareness of the fact that not all is allowed and that one cannot do everything one wants," Benedict said.

"However, this is not the true and proper way to defeat the infection of HIV," he added, saying the "humanization of sexuality" was the best method.

"What makes this newsworthy is that he's talking about an exception, where there were no exceptions whatsoever before," said James Martin, a New York Jesuit priest and author.

"Just that the discussion is happening is significant," he added.

Benedict's remarks may foreshadow a shift in the Roman Catholic Church's stance on the issue.

The Vatican's official newspaper quoted the remarks, which come from a book due to be published this week.

The book, "Light of the World: The Pope, the Church, and the Signs of the Times," was written by German journalist Peter Seewald and published by Ignatius Press.

CNN Senior Vatican Analyst John Allen cautioned that Benedict's comments do not rise to the level of official Vatican policy, but show the pontiff has flexibility in the church's opposition to birth control.

Allen said that a portion of the book refers to condom use among male prostitutes.

"I think the point he was trying to make, when somebody is using a condom, not so much to prevent new life, which has always been the Catholic Church's big concern, but to prevent the transmission of disease then it would be OK," Allen told CNN.

Although Benedict did not mention it, his statements indicate he may also find condoms appropriate in the case of heterosexual couples where one of the partners has a sexually transmitted disease, Allen added.

Catholic theologians and a special Vatican commission have previously said that condoms may be acceptable in some cases to prevent AIDS, Allen wrote in a blog Saturday.

But Benedict had kept silent on the issue.

Allen said he does not think the pontiff's comments signal a sea change in the church's broader birth control policy, as condoning the use of a condom to prevent the spread of disease is not the same as saying it's okay to use one to prevent a pregnancy.

Still, Benedict's comments open a door and may mark a shift in his thinking about condoms and AIDS.