Sail the high seas on a budget 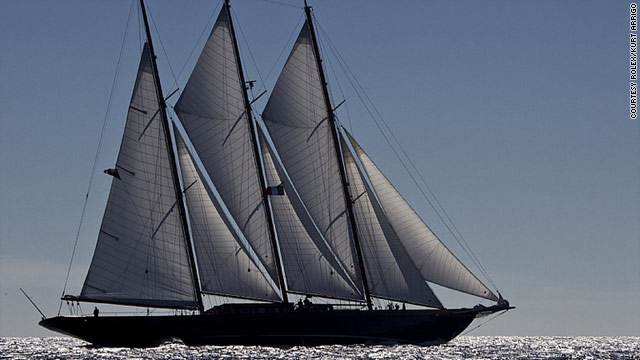 Ever dreamed of sailing the seas but don't have the cash to do it? Time to get a job as a "working passenger."
STORY HIGHLIGHTS

(CNN) -- If you think that luxury sailing holidays in the Caribbean, Mediterranean or South Pacific are only for the mega-rich, then think again.

With global sales of private yachts continuing to grow, there are now more opportunities than ever for people with little or no sailing experience to travel the seas on the cheap, according to Alison Bennett, author of "The Hitchhiker's Guide to the Oceans."

"With a bit of preparation, anyone who's up for getting their hands dirty can sail the world as part of a crew on a tall ship or luxury superyacht," she said.

After graduating from college last summer, Leo Miller wanted to sail from Portsmouth in the UK to the Mediterranean -- but he didn't have enough money for the trip.

So he landed a spot as a waiter and "general dogsbody," or laborer, on board a privately owned superyacht. Although he was taken on as a volunteer, Miller says he covered most of his living costs through tips.

"No day was ever the same," he said. "I made a ton of new friends and got to swim in the Caribbean... just for serving up food and drinks on a swanky yacht!"

The best thing about the experience, the 24 year-old said, is that "the rest of the crew are generally fun-loving, adventurous people -- most of whom have had the same idea as you."

Tips and advice:
A Hitchhiker's Guide to the Oceans
Dockwalk

"It's a great way to have an experience that most people could never afford. You can travel for a couple of months, or for years on end," said Scott, who worked for six years as an onboard chef before setting up Global Crew Network.

The most common way to find a sailing job is online through sites like Global Crew Network, Crewseekers International, The Sailing Network and Float Plan.

Although it's free to register and view available opportunities, applicants will generally have to pay a small fee to get in touch with skippers and submit their resume and a cover letter.

Contrary to most people's expectations, there are a number of "working passenger" positions open to non-sailors, says Bennett. (See sidebar for examples)

But competition for these gigs is "huge," she said. She says talented cooks will always be in demand, while Scott contends that having multiple languages will probably give you the biggest edge.

However, nothing beats trading on multiple assets: "Put simply, if you've got five or six skills you'll be in demand much more than somebody who's got one," said Scott.

Just imagine dangling your feet over superyacht next to a totally isolated island in the Southwest Pacific. What would you do for that?
--Alison Bennett, author "Hitchhiker's Guide to the Oceans"
RELATED TOPICS

While private yachts do not require workers to have any formal qualifications, Scott says that skippers looking for voluntary crew will almost always favor those who do.

He suggests gaining some experience at a local marina or investing in some training if you're aiming to spend more than a few weeks at sea.

Costing around $700, "the STCW 95 is a basic sea safety qualification that you can do over the course of a few weekends and is internationally recognized," he said.

But those interested in sailing frugally need to keep their guard up. With applicants increasingly relying on the internet to find crew vacancies, deception and fraud have become commonplace, according to both Bennett and Scott.

"There are unscrupulous people out there who are advertising jobs on message boards and notice boards," Scott said. Once you send them your passport, driver's license and photo -- you've given them the tools for identity theft.

There are also people out there just looking for free labor, Bennett warned. Even worse, she says, you could be roped into illegal activities, such as drug smuggling, which is particularly common around the Caribbean.

If you plan to sail with a skipper, "you must check their credentials," she stressed. "If you can, look at the condition of the boat, find out where he's traveled before. Do your research and check if he's got all the correct equipment."

Scott advises applicants to check out Dockwalk -- a sailing crew community site, where people can share their experiences and draw on collective knowledge to establish if a captain is legitimate.

Bennett and Scott agree that travelers shouldn't let the dishonest skipper out there deter them. With the right research and enough forward planning, traveling the oceans as a working passenger can be a transformational experience, they say.

"Just imagine dangling your feet over a superyacht next to a totally isolated island in the Southwest Pacific," said Bennett. "What would you do for that?"