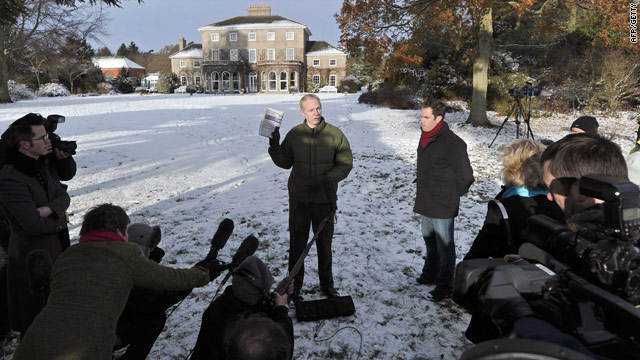 Beccles, England (CNN) -- WikiLeaks founder Julian Assange said Friday that the sexual misconduct charges against him are little more than an effort to discredit him and his organization.

"This has been a very successful smear campaign so far, but I think its days are numbered and people are starting to wonder, is what is claimed really true and if it is true, where is the evidence?," Assange told NBC's Today show. "Why has no evidence been provided even to me and my defense attorneys?"

Assange, who was released from a British jail on bail Thursday pending extradition proceedings involving sexual misconduct allegations in Sweden, said the technological and legal attacks on his website are diverting resources from its core mission. But he said it has not slowed the group from publishing new secret diplomatic documents.

"People like to present WikiLeaks as just me and my backpack -- that is not true we are a large organization," he told reporters. "It is resilient, it is designed to withstand decapitation attacks and our publication rate actually increased during the time I was in solitary confinement."

Assange was released Thursday after a British court rejected an appeal on behalf of Swedish authorities to keep him jailed pending an extradition hearing.

Assange is wanted for questioning on accusations of rape, sexual molestation and illegal use of force stemming from separate incidents in August in Stockholm. He has not been charged, but he could face two years in prison if convicted.

The next hearing in the case is scheduled for January 11.

Assange, 39, and WikiLeaks have been under increasing pressure since the organization began releasing secret U.S. diplomatic cables late last month.

Web service providers and payment processors have cut their relations with the organization, its website has been subject to attacks and U.S. authorities have reportedly convened a secret grand jury to investigate possible espionage charges against Assange.

U.S. Attorney General Eric Holder has said he has authorized "significant" actions related to a criminal investigation into the publication of the diplomatic cables, but has declined to elaborate.

Assange said evidence of such an investigation is mounting and responded to a claim that surfaced Friday that he may have supplied software to a U.S. Army private accused of downloading secret documents without authorization.

"I have no information about what you are referring to," Assange told Today. "We don't know what the grounds of that investigation is."

Assange said he is concerned for Army Pfc. Bradley Manning, who faces military accusations of accessing military and diplomatic documents for which he did not have authorization. Manning is being held in solitary confinement, as Assange was while in custody.

"WikiLeaks is designed to not know who its sources are. But we can see he is the only person who has been accused and that means he is in a difficult position where he is, in solitary confinement," Assange said.

The organization has offered $50,000 for Manning's defense, Assange said.

"All hearings in Sweden were secret. A gag order was attempted to be placed upon my Swedish attorney," he told Today. "And the requested conditions upon my extradition to Sweden and arrival in Sweden was that I would be held incommunicado."

He said something is seriously wrong that such investigations would be handled in such secrecy.

Assange -- saying he cooperated with Swedish authorities, got their permission to leave the country and promptly turned himself when when a European arrest warrant was issued -- said he was fighting extradition not because he is guilty but on principle.

"It is not the case that I or any other person should have to fly off to foreign states without the provision of any evidence whatsoever," he said. "That is simply not acceptable to me and it should not be acceptable to any person."

Assange said following his release that while clearing his name is important, so is continuing the work of WikiLeaks.

About 2,000 of the 250,000 U.S. State Department documents WikiLeaks says it has have been released, Assange said Friday, and more are being published daily.

Leaders of the United States and some other countries have said that releasing the documents threatens lives, national security and international relations. WikiLeaks and its supporters say the public has a right to know what goes on behind diplomatic doors.

Assange, was initially granted release on bail on Tuesday, but British prosecutors acting on behalf of Sweden appealed the decision, delaying his release.

Assange said after his release Thursday that his arrest "confirmed to me personally that we are on the right path and has given me enough anger about the situation to last me 100 years."